LOS ANGELES, California (CNN) -- When Scarlett Johansson was hired by Woody Allen for the film "Match Point" in 2005, she was a last-minute replacement. 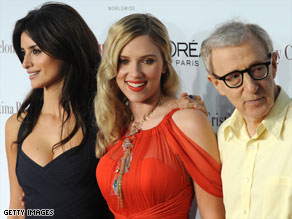 Now Johansson is Allen's leading lady of choice, following in the footsteps of Louise Lasser, Diane Keaton and Mia Farrow.

The actress stars in her third Allen film, "Vicky Cristina Barcelona," set to be released Friday. And her role as Cristina is nothing short of anticipated -- mostly because of buzz about her steamy love scenes with co-stars Javier Bardem and Penelope Cruz.

In the movie, Johansson and actress Rebecca Hall play, respectively, Cristina and Vicky. The two spend a summer vacationing in Spain where they meet a passionate artist (Bardem) and his slightly crazy ex-wife (Cruz). The love triangle that results is classic Woody Allen.

"[The movie is] about how hard it is to find love in the world, and how many traps and pitfalls there are," Allen said. "And how many problems we make for ourselves."

Watch the cast of "Vicky Cristina Barcelona" talk about the movie »

In other words, his "usual negative spiel," he said.

CNN talked to Johansson about why she loves working with Allen, what it was like to kiss Cruz and the public's "crazy" reaction to her Barack Obama support. The following is an edited version of that interview:

CNN: I think I'm going to start off with the question that's on everyone's mind. What was it like to kiss Penelope Cruz?

Scarlett Johansson: It was a lot less hairy than kissing Javier Bardem, I will say that. It's so unsexy when you're actually doing it because there's like 60 crew members eating their lunch, you know, trying to catch a bite while you're doing the scene.

I think that it felt very normal. These two characters are in love with each other and it's romance. It's not some gratuitous make-out session. I mean it was part of our characters' lives, their development.

CNN: Well, this is your third time working with Woody Allen, and I'm convinced that there's something in your clause that says you have to do at least one Woody Allen film per year.

Johansson: I so wish that I could have that kind of contract. I would do craft service [movie catering] for Woody. I would do anything for him. He is so much fun to work with because, you know, we're friends, and it's like I come into work every day and you're working with people that you love, and you know, we have almost a silent communication between us.

CNN: Had you ever met Javier or Penelope at all?

Johansson: I met Penelope before, but only outside of work. I met her socially, but I didn't really know her. And Javier, I don't think I had ever met him.

You know we're going into this really intimate relationship, all three of us, and we all fell so easily into that pattern. Penelope and Javier are both the sweetest. Of course, every woman on the side is charmed by Javier. He's so charismatic ... and Penelope's like this little firecracker.

So the three of us just had such a wonderful time and really just enjoyed the scenes that we had together because we were able to improvise. We were able to really have an interesting dynamic between us.

CNN: What was the one thing that lured you to this film? Was there one thing, other than Woody Allen, that made you say, "This is something I really want to do?"

Johansson: I think that I could not necessarily relate to, but I had an understanding of my character when I read the script. I would never do a film unless I could imagine myself playing the part and I had an idea.

I kind of knew her, or I felt like I could get into that mindset, and that was the lure -- other than of course all the other things you mentioned, like Woody, Barcelona, Penelope, Javier ... ahh, like I said, I'd do the craft service.

CNN: You are quite the busy actress. [You just got] engaged, you've got "She's Not That Into You" coming out. How are you doing it all?

Johansson: Well, [the film is] finished and it's going to be released, I think, in February. And also I have "The Spirit" coming out in December, and I just directed a short.

So it's a lot, you know, but this is my work. This is what I love to do. It's my job and it's what I've always been passionate about -- performance and being collaborative and creative. I mean, that's what I thrive on.

CNN: Are you going to be able to squeeze any time to go to the [Democratic Convention]? I know you're a Barack Obama supporter.

Johansson: I'm not exactly sure if I'm going to go yet. I have a lot of friends that are going, of course, and I'm very, very excited to see him accept the nomination. I can't wait to hear the speech. I know a lot of people feel that way.

CNN: There's been so much fallout ever since you mentioned your name with Barack Obama. (There was some minor clucking in late spring when Johansson said she and the candidate had exchanged e-mail messages.) What do you think of that?

Johansson: It is crazy. I think that it's, you know, it's strange. I've been supporting Obama for years, and always, I think like a lot of his supporters, always wanted him to run ... please run, please run!

And then when he finally did run, [I wanted to do] anything I could do, any way I could be associated and help out. It's funny how the media has twisted it around in like some crazy way, but I will continue obviously to be a surrogate and do fundraising and all of that stuff. I'm a huge, huge supporter.