(CNN) -- Jim Carrey has been making audiences laugh for years, but the star says he's really a "weird, serious person." 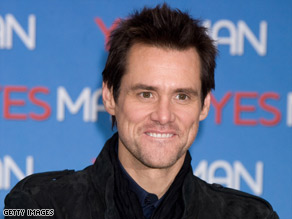 Jim Carrey is a star on the big screen, but he says he would love to do a play on Broadway.

He says he's battled depression and loves to do drama as much as the funny stuff.

Fans of his lighter side, though, may be glad to see his latest film is a comedy, "Yes Man," which opens in theaters Friday.

Carrey spoke with CNN's Larry King about his life on and off the screen.

King: How did you get this project?

Carrey: I think projects find me. You know, it's really interesting. Everything I've done, from "The Truman Show," the "Eternal Sunshine" to "Yes Man" and "Bruce Almighty," always come into my life at the perfect time.

King: So have you turned down anything you regretted?

Carrey: I never regret. ... [But] you know, "Meet the Parents" was something that I was developing.

King: You turned that down?

Carrey: Yes. I actually created the Fockers in a creative meeting. Yes. But, it was perfect that Ben Stiller did it. When I saw it, I went, "That's the way it's supposed to be done."

King: The premise of "Yes Man" is what?

Carrey: It's a gentleman by the name of Carl Allen, who has kind of stopped living. He got hurt in a relationship and he just kind of went into his shell, and he decided to say no to life. And he decides that, at a certain point, that he's kind of losing touch with everything. He runs into a guru -- a new-age master played by Terrence Stamp. ... And he makes a covenant with this man that he will say yes to everything no matter how ridiculous it is.

King: Isn't "no" the hardest word to say?

Carrey: It is hard for me. Especially when you've got money. It's like, you know, there's so many people, man.

King: Are you the most comfortable with comedy?

Carrey: No, I love it all, honestly. I love -- I love being creative. ... I feel so lucky to be given all of these opportunities, to be able to do a movie like "Ace Ventura" and then do "The Truman Show" and "Eternal Sunshine," and to be able to do the "Yes Man," which is flat-out comedy and that has a little something to think about.

King: Ever want to do Broadway?

Carrey: I would love to do it. I hope I could do it.

King: How did you and [girlfriend Jenny McCarthy] -- how did that happen?

Carrey: It's funny how that happens when you're in a place that's really wonderful. I had already gotten to a place in my life where I felt at peace, and I was invited to David Spade's birthday party. And I went out there that night and I was just in a zone. And I just felt wonderful. It was one of those times when you don't have to be anywhere but where you are.

King: And you had no girlfriend?

Carrey: I had no girlfriend at the time. I mean, I was just knocking them off one after another. It was just sick. But -- so I went to the party. And I just stood there in the middle of the room and kind of had that feeling like I was everything I felt. And she looked at me, and she said, "You just looked so peaceful that I had to come and talk to you."

King: What did you think when you saw her?

Carrey: I went -- well, I mean, I'd seen her a bunch of times, never in person. But I just thought -- well, she's nothing like the persona, like the "Singled Out" person that I met -- or that I knew, that I had seen. Because I don't think I wanted to go out with that person. You know? She was brilliant, but that wasn't the choice I would make. She was completely different than that. She was really sweet.

King: And that's magic when it hits?

King: You can't predict it?

Carrey: No. You're just lucky while it's there, you know. That's all, just lucky.

King: Are you going to marry Jenny?

Carrey: No. I am married to Jenny. I love Jenny very much, and we have a great relationship. And we've both been married a couple times. ... I like it the way it is, and I think she likes it the way it is. You know? And that's all we need. I really don't, at this point of my life, feel like I need to have the approval of someone in the collar or a judge to tell us that our relationship is sacred.

King: Didn't you suffer from depression?

King: How did you get through that to this?

Carrey: Well, that's another thing. You know at the risk of like opening up the whole Tom Cruise Prozac argument, you know, I don't disagree in many ways. I think Prozac and things like that are very valuable to people for short periods of time. But I believe if you're on them for an extended period of time, you never get to the problem. You never get to see what the problem is, because everything is just kind of OK. And so, you don't deal. And people deal when they get desperate.

King: So how did you do it?

Carrey: I take supplements. ... It's a wonderful thing. It's amazing. I'm going to talk a lot about it in the near future.

King: You're going to write about it?

All About Jim Carrey • Jenny McCarthy