LONDON, England (CNN) -- Troubled pop star Amy Winehouse spent the night in a London hospital after suffering a reaction to a medication she was taking at home Monday night, according to her spokeswoman. 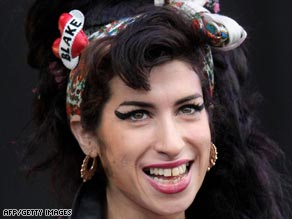 Tracey Miller said she could not say what medication was involved.

A statement from University College Hospital said Winehouse had been kept in overnight for observation.

She had a comfortable night and was released Tuesday morning, the statement said.

London Ambulance Service said it transported the singer after being notified of "an adult female taken unwell."

Winehouse's spokesman in London, Chris Goodman, told the British Press Association that he had not been told what was wrong with the 24-year-old singer, who is well known for her song "Rehab," describing the singer's reluctance to enter a clinic.

The pop singer was investigated this year after a London tabloid made public a leaked home video that showed her smoking something in a glass pipe minutes after she was heard saying she had just taken six tablets of the anti-anxiety drug Valium. Police declined to file charges.

The singer has battled drug addiction and spent about two weeks in a rehabilitation clinic in January.

Winehouse won five Grammy awards this year -- three for "Rehab" as well as Album of the Year and Best New Artist.

Winehouse's Grammy winning album, "Back to Black," is still a big seller, recently charting at No. 12 in the UK more than 19 months after its release. Madame Toussaud's London wax museum recently unveiled a wax statue of Winehouse alongside Madonna, Jimi Hendrix, the Beatles, Justin Timberlake, Beyonce and other musicians in the museum's "Music Zone" exhibit.

On July 21, Winehouse's husband was jailed for 27 months. He admitted to brawling with a pub manager and then offering him $400,000 to not talk about the incident.