(CNN) -- All apologies, but here we are now, 17 years after Nirvana's breakthrough album irreversibly changed music, and the naked baby pictured on its cover is still chasing dollars. 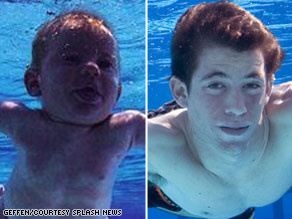 Spencer Elden, the underwater infant pursuing a dollar bill on the cover of 1991's "Nevermind," is doing swimmingly these days, having graduated a year early from a Los Angeles-area high school.

Being the "Nirvana baby" -- as Elden calls himself -- has been profitable.

Now 17, Elden says he was paid $1,000 to re-enact the famous pool pose for photographers. Compare that to the original shoot, which paid $200.

"Stuff happens like random cool situations where I get paid $500 just to go hang out," Elden said. "People just call me up and they're like, 'Hey you're the Nirvana baby, right? Well just come and swim in my pool and we'll give you some money.' " Read more about Elden and the 1991 photo shoot

Not everyone can say their naked baby picture has become part of America's pop-culture psyche. Like Nirvana, Elden hopes to entertain us. He wants to be an artist or graphic designer.

Elden has snagged an internship with street artist Shepard Fairey, creator of the ubiquitous Warhol-esque red, white and blue Barack Obama posters. Fairey heard Elden interviewed on the radio and one thing led to another, said the teen. Random fame has "been a really good foot in the door," he said.

A Hollywood film role might be in the works, but Elden and his father, who is also a designer and artist, aren't revealing any details. "Some director's been calling me and wondering maybe about doing a movie with me as one of the characters in it," said Elden. "It sounds like fun."

It's all very exciting, he said, for a self-described normal teen who spends a lot of time drawing. Really, all he wants is a guest spot on the "Howard Stern Show."

"I think it would be fun just to hang out and chill with him for a while," he said of the XM/Sirius radio host.

All the hoopla swirling around Elden proves that Nirvana's musical contribution stands the test of 17 years as a major milestone in music history.

"Nevermind" has become a pop culture rarity: a specific item widely regarded as a pivotal point in cultural change. The album marks the musical shift from the bouncy, upbeat rhythms and melodies that were popular in the 1980s to the dour and cynical "grunge" music that audiences widely embraced in the 1990s. iReport: Show us your grunge days and reflect on "Nevermind"

With "Nevermind," grunge, as the mainstream press dubbed it, had risen from "underground alternative" to the global mainstream. iReporter: Nirvana taught me how to play music

The triumph blew 1980s-style "poodle-hair metal" music off the map, wrote Rolling Stone magazine, which in 2003 ranked "Nevermind" at No. 17 of the 500 greatest albums of all time.

Even when the album ascended to the top of the charts, it made its own rebellious statement, dethroning the King of Pop by knocking Michael Jackson's album "Dangerous" from Billboard's No. 1 spot.

"Nevermind" essentially sowed the seeds for music that defined the 1990s, said Tom Moon, author of "1,000 Recordings to Hear Before You Die." "You could argue that whatever American indie alternative rock was, by the time Nirvana came along, it became something different after that."

Front man Kurt Cobain proved himself to be "a great hooksman," said Moon, especially with the album's breakout track "Smells Like Teen Spirit."

Cobain's verses "are sort of atmospheric sometimes" and then "bust down the door" with an explosive chorus," Moon said. "They weren't the first to do this, but Nirvana took it in a much more abrupt direction. It's exciting and it still works."

That point was echoed last month when Pitchfork Media, a cultural oracle for indie geeks, listed the song among its top 500 tunes "from punk to the present."

Time magazine chimed in and praised the song's "four-chord power sequence that never, ever changes" which, although unique, mixes the rhythm from Boston's "More Than a Feeling."

"If you'd asked one hundred Sex Pistols/Ramones wannabes how F-B-flat-A-flat resolves, one hundred of them would've told you it goes to C, duh. Kurt [Cobain] knocked the world on its ass by choosing D-flat instead," wrote Time's Claire Suddath.

Nirvana's promise was cut short in 1994 by Cobain's suicide at age 27 in his Seattle, Washington, home.

But the band's success opened the flood gates for flannel-clad, angst-ridden rockers including Pearl Jam, Soundgarden and others.

"It was no accident that Alice in Chains, Screaming Trees and bands like that connected in the wake of what Nirvana did," said Moon. "The musical ideas that Nirvana was about were so powerful they couldn't help but spread."

All About Nirvana • Pop and Rock Music • Pearl Jam