(CNN) -- In 1991, Nirvana changed American rock music with an album that featured a naked baby on the cover. 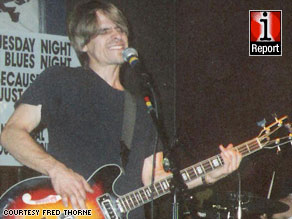 Fred Thorne played in bands for 18 years and says Kurt Cobain's legacy always stuck with him.

Now, that naked baby is 17 years old and a high school graduate. The album, "Nevermind," is a classic beloved by music aficionados across the world. It soared to the top of the Billboard charts, swiftly ending the '80s era of dance pop and "hair metal" and replacing it with the "grunge" movement. In doing so, it irreversibly changed the tastes and even lives of millions of musicians and music lovers.

"One song changed the way we look at rock music," said Russ Lancaster of "Smells Like Teen Spirit," the first track on the record. "Just like the Beatles changed pop music 30 years prior, Nirvana's breakthrough album achieved the same level of power in terms of changing pop music. They weren't singing anymore about happy, funny songs. They were taking a real dark turn to pop music, and it changed everything. Back then it was really different to hear that on the radio. It opened up a floodgate of artists that might never have been heard before that."

What artists, exactly? Lancaster says Pearl Jam comes to mind, and that the entire emo genre might never have come into existence if it wasn't for grunge.

"It wouldn't have the visibility it has today without the stepping-stone that grunge gave it," he said. iReport.com: Passing grunge onto the next generation

"What I appreciate 'Nevermind' the most for was paving the way for other indie bands that I really ended up liking to get put out into the mainstream. Not so much for the exposure they got, but so that everyone could more readily get their product," he said. "It was a world without iTunes, Rhapsody or Napster. The only way you got exposure to music that wasn't pop [or] country was living close enough to a university-run radio station or having a friend who had access to it. It wasn't long after the grunge era started that other indie rock bands like Dinosaur Jr., Sebadoh, Superchunk, fIREHOSE and a wealth of others broke out and started becoming a bit more accessible." iReport.com: 'A lot of bands owe a lot to that record'

For Derek Ivy, the influence of Nirvana is a little more personal. Hearing "Nevermind" and the band's other albums inspired him to learn guitar as a teenager, and he still plays in a band called Golden Hours.

"Nirvana taught me to play music," said Ivy. "Everybody has the first few songs they ever learn to play, and for me it was mostly this Nirvana stuff. When I hear this album or think of it, I recall the countless afternoons I spent playing these songs on guitar and, later, drums. I remember learning every song on it, and pretty much every other Nirvana song."

Ivy said Nirvana front man and songwriter Kurt Cobain was an important influence in his life, musically and otherwise.

"Kurt Cobain was one of my earliest and greatest musical influences, as I'm sure countless others can attest to. And he's a tremendous influence on me in a lot of different ways," he said. "When Kurt died, I felt like I'd lost a personal friend, even though I didn't know him and I was only 14 at the time. It was sort of like, here you go, here's adulthood." iReport.com: 'My teenage years would have been considerably less bearable were it not for this band'

Cobain was also a profound figure in Fred Thorne's life. Thorne played in bands for 18 years, and he said Cobain's success on the charts and ultimate suicide led him to heed the Nirvana front man's advice: "Be careful what you wish for."

"These words were the fuel for the angst I needed to 'kill it' on stage and give everything I had to just flat out rocking," Thorne said. "That meant no record deals, no big crowds, no bitching at the sound man because I couldn't hear the vocals in the monitor, no perfect intonation, no perfect pitch, and if I blew out my voice...bonus! These words left me not wanting, but left me satisfied that I played that bar gig to 10 or 20 people like it was my last. In a way I felt like I did it for Kurt. I did it because I knew how badly he wanted to go back to those days of being a nobody and getting booed off the stage, or duct taping gear together and saying...we can just make noise, vent our angst and throw all regard for approval out the window." iReport.com: 'Kurt will always be an icon for indie musicians'

Of course, not everybody enjoyed "Nevermind" or the grunge movement it popularized. Take David Gillespie, for example. He agreed that "Nevermind" was a turning point in music, but for him, the turn was for the worse.

"Thanks for ending the greatest era of music ever," he wrote in his iReport.com submission. "The onslaught of grunge killed off the best music. The '80s brought such incredible talent and songs that no other decade or era could match."

Gillespie said he doesn't think the grunge movement could compete with styles like glam rock and 1980s dance pop in terms of musicianship.

"Nirvana was not exactly the most musically talented band. Then again, they didn't really need to be," he said. "Grunge as a music form wasn't about technical prowess and didn't need to sound good." iReport.com: 'Their music was bland and depressing'

Amy Suarez, who called the record "the pinnacle of my music heaven," said that opinions of "Nevermind" and the grunge movement are probably just a reflection of the different generations.

"I truly believe that Nirvana, its predecessors and like bands of that time will forever be thought, to me, to be the best and most influential music of my life," she said. "I know that everyone who loves music can say that about the music of their prime. So, I guess I would agree with others who would say that Nirvana was great for many and meant nothing to others; it's just a matter of timing." iReport.com: 'Not everything has to be complicated to be good'