(CNN) -- On a sunny day at the Rose Bowl Aquatics Center in Pasadena, California, in 1991, photographer Kirk Weddle was setting up to shoot what would become an iconic image in rock music. 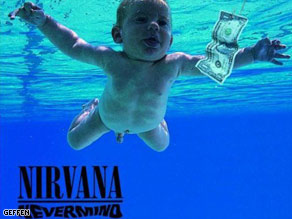 Weddle's close friend, artist and designer Rick Elden, remembers that day well because he had brought his 4-month-old son to the pool for Weddle to shoot.

Weddle had been tapped to create the cover for what would become Nirvana's breakthrough album "Nevermind."

"We went to the same college together," Elden said of his friendship with Weddle. "We were tight buddies and we'd been through a lot together."

To hear Elden tell it, the shoot was just another job in a long string of photo shoots for musical acts during his association with Weddle.

"Keep in mind we shot the Temptations, and so many bands," he said.

On the day of the Nirvana shoot, Weddle was said to be working on an idea dreamed up by the band's relatively unknown frontman, Kurt Cobain, Elden said.

"Rumor had it that Cobain had the original concept of wanting to show a mother giving birth under water," Elden said. "but the compromise was to have a baby swimming under water. Or so that's what I was told."

A dozen infants including Elden's first-born son Spencer were signed up for the photo shoot in the pool that week. On that particular day only Spencer was scheduled to swim for Weddle. Read more about what Spencer Elden is doing now

The boy was in good hands, said Elden, a certified lifeguard. And even at 4 months, Spencer was a good swimmer, he said.

However, "if you don't pull them up, they will drown," he joked. "There's tricks to it: You blow in the kid's face and it creates a gag reflex. Infants have a gag reflex, as we all do. You hold him up really close to your face. You blow into him really hard. They gasp, and into the water they go."

Weddle then shot just 18 frames, according to Elden. "We only had a half a second" before the shoot was over and little Spencer was plucked from the water. "Boom, boom, boom. End of story," he said. "We got paid $200."

"I haven't been swimming as much lately as I'd like to, but I plan on starting swimming next summer," he said.

All About Nirvana • Pop and Rock Music • Pearl Jam