(CNN) -- Jeannie Longo-Ciprelli would be remembered as the greatest female cyclist of her generation even if she had never been an Olympic champion. 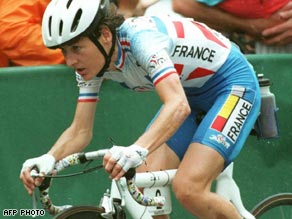 For much of her career, the Olympic gold was the one honor to elude the French rider.

Misfortune, it seemed, was to be her fate every four years, regardless of how many world championships she won in between.

In 1984 the first women's Olympic road race coincided with Longo-Ciprelli's rise to dominance in the sport.

Well-placed going into the final lap, she appeared set to challenge in the sprint, only to be knocked off in a collision.

By 1988, Longo-Ciprelli was a three-time road race world champion, as well as a double winner of the women's Tour de France, and the clear favorite for gold in Seoul.

But a broken hip a month before the Games derailed her preparations. Although she recovered enough to ride the road race, she could manage just 21st place.

Tactical error More disappointment followed in Barcelona in 1992 as Longo-Ciprelli paid the price for a tactical error. With three kilometers to go, she raced away from the peloton and crossed the line in celebration.

But she had failed to realize that Kathy Watt, an unheralded Australian, had slipped away from the lead group apparently unnoticed with a lap to go, and finished 20 seconds further in front.

At 37, Longo-Ciprelli was no longer the dominant presence she had once been, but she still possessed the ability to raise her performance for the biggest races, as she had proven by winning her fourth road race world title in 1995.

Her preparations were typically unorthodox -- while her rivals were acclimatizing to the Atlanta heat, Longo-Ciprelli trained alone in the mountains of Colorado, arriving just two days before the race.

The race itself was run in a sudden downpour, which sent many riders crashing and skidding and had the rest struggling to stay on their bikes.

Unruffled, Longo-Ciprelli broke clear with two other riders and then launched her gold-winning solo attack 11 kilometers from the finish.

Longo-Ciprelli was back for her fifth and final Olympics in Sydney in 2000 at the age of 41, this time claiming bronze in the time trial -- and event in which she had also won silver in 1996.