(CNN) -- Although his sport might not be the most high-profile Olympic discipline, Paul Elvstrom's four consecutive sailing gold medals -- all in the same individual event -- guarantee him a place in the roll-call of all-time great Olympians. 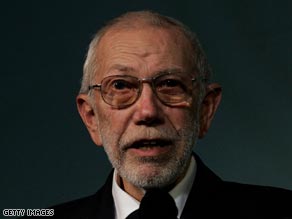 Elvstrom inducted during the launch of the ISAF Sailing Hall of Fame on November 5, 2007

Only two other athletes -- Al Oerter (Discus) and Carl Lewis (Long Jump) -- have matched his feat, while just three others -- Hubert Raudaschl (Sailing), Durward Knowles (Sailing) and Ivan Ossier (Fencing) -- have, like Elvstrom, appeared in eight or more separate Games.

Born and raised near the Hellerup Marina in Copenhagen, Elvstrom began sailing at an early age, honing his skills at the famous Hellerup Sailing Club.

He won his first Olympic gold aged 20 at the 1948 London Games (the sailing events were held off Torbay in Devon), competing in the Firefly Class. It was to be the start of an Olympic career spanning an astonishing forty years.

He repeated his success four years later in Helsinki -- by which point the Firefly had been renamed the Finn Class -- and again in Melbourne (1956) and Rome (1960).

In his last two Olympic outings, sailing in the Tornado Class, his boat was crewed by his daughter Trine, the only father-daughter team ever to have appeared together in Olympic competition. They came fourth and 15th respectively.

As well as his Olympic victories Elvstrom won a host of other competitions, including 15 World Championships (in eight different classes), and eight European Championships.

In addition he has made significant contributions both to the formulation of the rules of competitive sailing, and also to sailing technology.

He invented the "hiking bench" -- a device that allows sailors to hone their skills on dry land -- and played an important role in the development of, among other things, the ratchet block, flexible life jacket and sailing boots with non-skid soles.

In 1996 he was voted Sportsman of the Century by the Danish Sports Federation.

All About Olympic Games • Sports • Sailing