(CNN) -- Birgit Fischer made her Olympic debut in Moscow at the age of 18 and was set to retire after the Sydney Games in 2000. 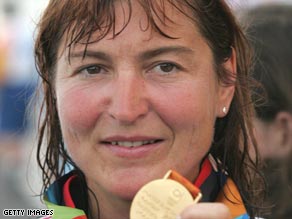 Fischer hopes to add to her 10 Olympic medals in Athens.

But the German announced she was coming out of retirement in 2004 in time for the Athens Games, the aim of adding to her 10 medals -- already a canoeing record.

Athens brought her a gold and silver medal.

It was a different story in Sydney, however, after Fischer had entered the record books with victories in the 500 meters pairs and the 500 meters fours.

"No more competition," she had said as she climbed out of the canoe after becoming the first woman in Olympic history to win gold 20 years apart and the fifth competitor to collect winner's medals at five separate Games.

"Sometimes you just have to finish and it's great to finish on a high."

But perhaps Fischer felt she is still owed a Games.

As an 18-year-old in Moscow in 1980, Fischer claimed gold in the individual event.

But she missed the 1984 Games -- at a time when she was a world champion at singles, pairs and fours -- as East Germany joined the Soviet Union in boycotting Los Angeles.

In Seoul in 1988 Fischer was beaten into second place in the singles final, but she shrugged off the defeat to win gold in the pairs and the fours.

Fischer briefly retired after Seoul, but by 1992 she was back in competition as part of a unified German team.

In Barcelona she regained the individual title she had previously won in 1980 and also collected a silver medal in the fours.

Two more medals in Atlanta in 1996 (a gold in the fours and a silver in the pairs) set Fischer up for her record-breaking efforts in Sydney.

Fischer also won 27 world championship titles between 1979 and 1999, yet in a sport that is rarely in the spotlight she remains modest about her achievements.

"The number of medals is simply not that important to me," she said after Sydney.

"Most of the medals I have won have been in team events, so the medals are not just my medals but are earned by the rest of the team members as well."

All About Olympic Games • Canoeing and Kayaking