(CNN) -- Renowned as much for her behavior out of the pool as her victories in it, Dawn Fraser is the greatest, and certainly most colorful female swimmer in Olympic history. 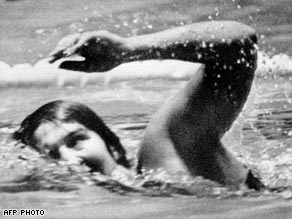 Fraser was the first woman ever to successfully defend an Olympic title.

The Australian won eight Olympic medals and was the first swimmer, either male or female, to win gold in the same event at three successive Olympiads.

The youngest of eight children, she suffered from chronic childhood asthma and took up swimming to help improve her breathing.

"Mine was a complete love affair," she later recalled. "It's a beautiful thing, diving into the cool crisp water and then just sort of being able to pull your body through the water and it opening up for you."

Her talent was spotted by coach Harry Gallagher, the latter agreeing to train her for free on account of her family's poverty.

By the age of 16 she was already breaking national records, one of a group of outstanding young Australian female swimmers of that period known collectively as "The Water Babes."

She came to world attention in February 1956 when she bettered Willy den Ouden's 20-year old world record for the 100-meters freestyle.

At her first Olympics later that year, in Melbourne, she set another world record in the same event -- 62 seconds -- and took a second gold in the 4x100 meters freestyle relay, the latter also in a world record time (four minutes 17.1 seconds).

She repeated her 100 meters freestyle victory in Rome four years later, the only Australian woman to win a gold medal at that particular Olympiad, and the first ever woman to successfully defend an Olympic swimming title.

For all her success, however, the 1960 Games were notable as much for her clashes with sponsors, teammates and Australian swimming officials as her triumphs in the pool.

She was subsequently dropped from the Australian squad and, after further run-ins with officialdom, received a two-year ban from international competition.

Despite this, and a horrific car crash in early 1964 in which her mother was killed and Fraser herself seriously injured, she again successfully defended her 100-meter freestyle title at the Tokyo Olympics, beating off a spirited challenge from Sharon Stouder of the United States to become the first swimmer ever to win the same event at three successive Games.

The high-jinx and confrontations continued, however -- she was arrested for allegedly stealing a flag from the Japanese Imperial palace -- and shortly after the 1964 Olympics the Australian Swimming Union banned her for 10 years, bringing her competitive career to an end.

She subsequently went into politics and remains an iconic figure in Australia, despite, or perhaps because of, her determined non-conformism.

"I've always been known to speak my mind," she once commented. "I think that's why Australian people like me."

In 1996 she was voted the Person Who Best Symbolizes Australia.