(CNN) -- Nicknamed "The Gazelle" on account of her graceful running style and speed around the track, France's Marie-Jose Perec is one of the greatest female sprinters of modern times, and also the most troubled. 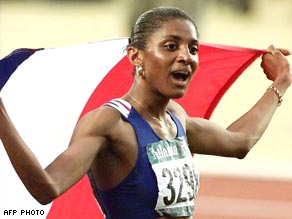 Perec: the "Greta Garbo" of athletics.

Born on the French-governed island of Guadeloupe, she was introduced to sprinting by her school gym teacher who, the first time she saw her run, was apparently so surprised by the girl's speed over 100 meters she asked her to do it again because she was convinced her stop-watch had malfunctioned.

Her competitive career got off to an uncertain start when she was disqualified from her first major tournament -- the French Inter-School Championships -- for stepping out of lane.

Thereafter, however, her trajectory was inexorably upwards. Although she only reached the 200-meter quarterfinals in her first Olympic appearance -- in 1988, in Seoul -- four years later, in Barcelona, she swept all before her, beating defending champion Olha Bryzhina by two meters to win the 400-meter gold in 48.83 seconds.

She successfully defended her title in Atlanta in 1996, holding off Australia's Cathy Freeman in a thrilling final to win in 48.25 seconds, an Olympic record and the third fastest women's 400-meters time ever posted.

In the process she became the first athlete, male or female, to retain an Olympic 400-meter title.

Three nights later she made history again by winning the 200 meters -- in 22.12 seconds. No other runner in a non-boycotted Olympics had ever before won both 200- and 400-meter titles in the same Games, although America's Michael Johnson emulated her feat 20 minutes later.

Despite her enormous success on the track, Perec's career has been dogged by controversy and illness.

She has had a number of highly publicized run-ins with the French athletics authorities, and is renowned for her obsession with privacy (she has been dubbed "the Greta Garbo of athletics").

In 1998 she has diagnosed with Epstein-Barr disease, or Chronic Fatigue Syndrome.

In 2000 she caused a scandal by storming out of the Sydney Olympics where her showdown with archrival Cathy Freeman had been one of the most highly-anticipated races of the Games. Freeman went on to win the title.

Since Sydney Perec has not raced competitively. After a planned comeback at the 2003 world championships in Paris was aborted because of injury, she had been tipped to stage a comeback at Athens, only to kill those rumors in an interview with French television in June.

"I have finally decided to hang up my spikes," said Perec.

"I am going to finally discover a real life, an everyday sort of life. I feel euphoric and very excited."