(CNN) -- Yoshinobu Miyake is perhaps the only athlete apart from Dick Fosbury who has had a technique named after him. 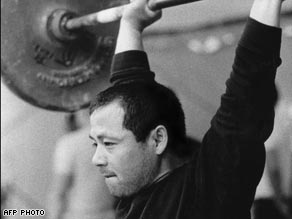 Miyake: the strongest man ever?

While Fosbury was throwing himself backward over the bar in the high jump in Mexico City 1968, Miyake was placing his ankles together, instead of apart, for the lifting snatch.

The "Miyake Pull" was also coined "Frog Style" after the stance the lifter adopts before the pull: heels together with knees fanned outward to around sixty degrees with a wide grip on the bar, resembling a frog upon the lift.

The technique proved physiologically efficient for a body bearing some 60 kilograms (132 pounds) of stress.

Miyake's Olympic gold in 1968 is less well known than Fosbury's, but pound for pound, in his own sport, he is considered one of the strongest men who ever lived -- and Japan's finest weightlifting exponent.

The medal re-affirmed Miyake's pre-eminence in the featherweight class and proved he could travel.

Born in Miyagi Prefecture in Honshu, north of Tokyo, in 1939, Miyake was all but unstoppable in the mid-1960s.

After coming fourth at the 1972 Munich Games, Miyake retired from competitive action to coach Japan's weightlifting team, helping his brother, Yoshiyuki, become world champion in 1969 and 1971.

All About Olympic Games • Sports • Strength and Weight Training