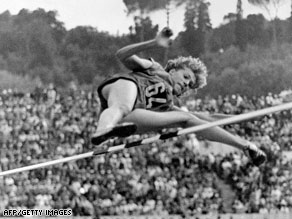 Although she won consecutive gold medals in Rome in 1960 and in Tokyo in 1964, the Romanian's achievements are perhaps better reflected in her 140 consecutive competitive victories in the event between 1957 and 1967.

Such was Balas' domination that at the time she set her final world record in 1961 no other woman had gone higher than 1.78m.

Her career best 1.91m would stand until 1971, by which point the sport had been revolutionized by Dick Fosbury's famous "flop" at the 1968 Olympics.

In fact, Balas had the perfect build for the pre-Fosbury era.

Standing taller than six foot, her preternaturally long legs were ideally suited to the "scissors" style favored by the leading athletes of the day.

"My style is quite obsolete but it suits my body structure," she explained later.

In Rome and Tokyo none of Balas' opponents even got close.

She won her first gold medal in 1960 by a margin of 14 centimeters with a leap of 1.85m -- one centimeter short of the world record she had set in Bucharest earlier in the year.

Four years later she retained her title, clearing 1.90m to win by 10 centimeters.

Balas continued to compete for three more years, battling with knee problems, until finally in 1967 she was beaten. It was her first defeat since finishing an inauspicious fifth on her Olympic debut in Melbourne in 1956.

She went on to become head of the Romanian Athletics Federation.