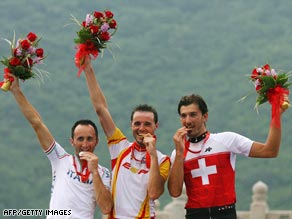 The 30-year-old headed off Italy's Davide Rebellin and Switzerland's Fabian Cancellara in a sprint finish to clinch the biggest victory of his career.

His previous highlights were five stage victories on the Tour of Spain, but he finished ahead of a field including his team leader Alejandro Valverde, defending champion Paolo Bettini of Italy and two-time Tour de France runner-up Cadel Evans.

Sanchez came out on top following a six-man battle on the final 250 meters, having completed the 245-kilometer (152-mile) course in a grueling six hours 23 minutes and 49 seconds in 90 percent humidity.

"I can't quite believe I've won the gold medal," Sanchez said. "My biggest fear was whether we'd be able to control the race as a team, and in such humid, and tremendous heat. But we raced to perfection."

The second left the 23-year-old with just Rebellin and Sanchez for company, but he missed out on a medal as Cancellara, racing alone after his sole teammate Michael Albasini was ruled out by a training crash, caught up to the leading trio in the final kilometer.

Kolobnev finished fourth, with Schleck fifth and Rogers back in sixth after suffering late cramp -- while his compatriot Evans was 15th.

Valverde was the second of the Spanish contingent in 13th, while Bettini was 18th.

"I knew on the last lap that my chance had gone," Bettini said after the seven-lap event. "I got stuck behind watching Valverde. I'm disappointed, but I can't complain. The race was very tough."

Spain's 2007 Tour de France winner Alberto Contador and compatriot Oscar Freire were among the 53 riders who failed to finish in the 143-strong field.