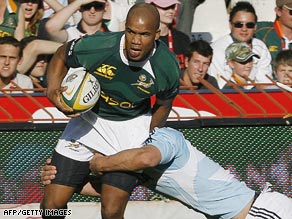 South Africa wing J.P. Pietersen went over for two of his team's nine tries against Argentina.

The Springboks, who beat the visitors in the semifinals of last year's World Cup, led only 14-9 at the halftime break but went on to run in nine tries.

Argentina captain Felipe Contepomi kicked three penalties, putting his side 9-0 ahead in the first 25 minutes despite the early loss of tighthead prop Patricio Ledesma.

No. 8 Pierre Spies added the third try soon after the break, then Pietersen's first try made it 28-9.

Scrumhalf Du Preez pounced on a loose ball to score the Boks' fifth try but center Fourie went off with 20 minutes left after sustaining a serious cheekbone injury.

But backrower van Niekerk came on to mark his 50th outing for South Africa with a brace of tries, while Bismarck du Plessis and Pietersen also went over.

South Africa now return to the final rounds of the Tri-Nations tournament, with leaders New Zealand visiting Cape Town next weekend and Australia coming to Durban and Johannesburg in the following fortnight.