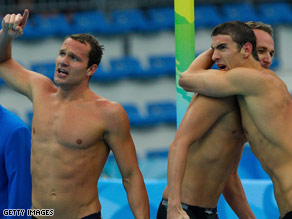 In modern Olympic history, no athlete has accomplished that feat. Until now, U.S. swimmer Marc Spitz's seven gold medals in the 1972 Games was the number to beat.

Phelps tied Spitz's record on Saturday in the 100-meter butterfly, winning by 0.01 of a second.

On Sunday, he took part in the butterfly leg of the 4x100-meter medley relay for the U.S. team -- and swam into the history books, 36 years after Spitz's wins.

"What he did was and still is an amazing feat, and will always be an amazing accomplishment for the swimming world and also the Olympics," Phelps said of Spitz.

But, he added, "I've said it all along, I want to be the first Michael Phelps, not a second Mark Spitz."

And in 17 swims over nine days at the Summer Olympic Games in Beijing, he became just that.

Eight events. Eight gold. Seven world records, including breaking his own world mark in three of them.

The only one where he didn't best the world time was in the 100-meter butterfly.

In the 4X100-meter freestyle relay, teammate Jason Lezak trailed by almost six-tenths of a second when he entered the pool for his anchor leg. But he blazed to victory and helped keep Phelps' pursuit intact.

And on Sunday, a final victory in the 4X100-meter medley relay sealed the deal.

"Every moment that I've had so far in and out of the pool will be with me forever," he said. "This has been one of the greatest weeks of my life, if not the greatest."

President Bush, at his ranch near Crawford, Texas, called Phelps Sunday morning. According to White House spokesman Gordon Johndroe, Bush told Phelps, "Laura and I are proud of you. Our family is proud of you, but most importantly, America is proud of you. We're excited for you. You handled yourself with humility. Give your mom a big hug for me. '41' and I were honored to get a picture with her." (The number 41 refers to Bush's father George H.W. Bush, the 41st president.)

Sunday's win brings Phelps' total Olympic gold medal count to 14. And while many were quick to proclaim Phelps the greatest Olympian of all time, he has some ways to go.

But Phelps is 23, and likely not yet peaked.

Consider his evolution: At 15, Phelps competed in the 2000 Olympic Games in Sydney, Australia, placing fifth in the 200-meter butterfly.

The following year, he broke the world record for the event, becoming -- at age 15 years and 9 months -- the youngest male ever to set a swimming world record.

When the Olympics came around again in 2004 -- hosted in Athens, Greece -- Phelps won six gold medals.

This year, he won eight.

"Records are always made to be broken no matter what they are," he told reporters. "Anybody can do anything that they set their mind to."

And after a vacation where "I wont' do anything," Phelps said he's setting himself some loftier goals.

"There are some things that I still want to do," he said. "I want to raise the bar in the sport of swimming more. It's come a long way. And I think it can go even farther.

"That's where I hope to take it. Even farther."