LONDON, England (CNN) -- They are globally recognized organizations whose top performers take home multimillion-dollar paychecks and whose results are followed and agonized over by millions around the world. 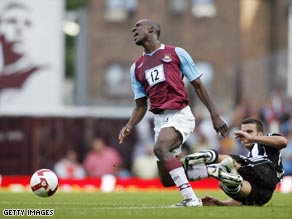 West Ham's financial future has been thrown into doubt by a downturn in the fortunes of the club's Icelandic owner.

Now the credit crisis threatens to sweep away the shaky economic foundations that have underpinned their gilded existence. Yet these are not the world's ailing banks but some of the world's leading football clubs.

Earlier this week the head of the English Football Association, David Triesman, warned that Premier League clubs risked bankruptcy under the weight of escalating debts.

The EPL is widely considered the world's most marketable football competition, attracting huge TV deals and billionaire owners from around the globe. Yet many clubs have also accumulated huge debts, risking all for a share of the spoils.

Speaking at the "Leaders in Football" conference in London, Triesman said English football was collectively in debt to the sum of $5.2 billion with the country's "big four" -- Manchester United, Arsenal, Chelsea and Liverpool -- believed to be responsible for a third of that total.

Addressing the same audience, UEFA General Secretary David Taylor warned that debt-ridden clubs risked exclusion from the lucrative Champions League if they failed to put their finances in order.

"The issue they have is less that the clubs are in debt, it's more how much debt they're in," analyst Drew Barrand of the Sport Industry Group told CNN.

"If that debt is over the value of the stadium and the players they have, then they need to cut it back. It's a cause for concern and in the current economic climate it's going to make people worried."

Watch how the credit crunch is hurting English football »

At some clubs the effects of the financial meltdown are already being felt. West Ham United has seen its shirt sponsor, travel firm XL, forcing the club to sew improvised patches over the company logo.

But the London club faced more serious problems this week when its Icelandic owner, Bjorgolfur Gudmundsson, suffered major losses as a consequence of the nationalization of the country's second largest bank, Landsbanki, and the near collapse of the Nordic nation's economy.

In a statement, West Ham insisted Iceland's situation would have "absolutely no effect" on the club or Gudmundsson's ownership on it. Yet the episode served to highlight that English football, and sport in general, is no more insulated from the economic crisis than any other industry or business.

"The economic climate is making everyone look over their shoulders. You have a situation where the banks are reviewing their arrangements with the big clients, including the football clubs," Barrand told CNN.

For the global super-rich, owning football clubs has perhaps always been more about prestige and glory by association than balance sheets and bottom lines. Earlier this season an Abu Dhabi consortium agreed a deal to buy Manchester City, transforming the Premier League outfit overnight into the world's richest club -- and splashing out $58 million on Brazilian superstar Robinho to celebrate.

Yet not even the Middle East has been immune from the economic slowdown. "You know there are great clubs in the Premiership, there are great clubs around the world, but football normally doesn't really pay as straightforward investment, there are very few clubs around the world where you can justify investment purely from a financial perspective," Sameer al Ansari of Dubai International Capital, a consortium previously linked with Liverpool, told CNN.

Nor is football the only sport to be affected by the financial crisis. Golf, the weekend pastime of choice for sports-minded executives, could also be hit hard with corporate sponsors already withdrawing from tournaments as they trim expenditure.

Some have linked the migration of top stars such as Phil Mickelson and Vijay Singh from the U.S. PGA Tour to the European Tour to the fact that the European Tour, which also stages events in Asia and the Middle East, is perceived as being more economically robust than its U.S. equivalent.

"Some sponsors are dropping off the Tour, there is no question about it. There is less money available for that type of activity," Jack Nicklaus told CNN earlier this year.

Motorsport could also be hit hard with carmakers around the world suffering falling profits. Already Formula One teams -- whose annual budgets currently run to hundreds of millions of dollars -- have agreed to urgent cost-cutting measures which FIA President Max Mosley says are essential to the sport's survival.

"Some of the manufacturers may be in difficulty now as well, because if you look at their share prices, their profitability, their sales, the days when they could just toss out 100, 200, 300 million euros a year, which is what Formula One costs those big companies, I think they're finished," Mosley said.