(CNN) -- David Beckham revealed that he has missed playing football "at the highest level" after being presented as an AC Milan player ahead of his three-month loan deal from the Los Angeles Galaxy. 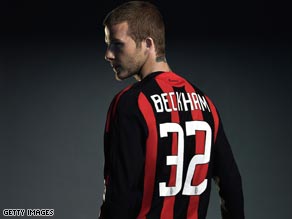 Beckham, 33, has negotiated a move to the Serie A giants in a bid to remain match fit and stay in the thoughts of England manager Fabio Capello.

His move to LA Galaxy from Real Madrid last year was perceived at the time as a step backwards to a league that has still to establish itself on the world stage, and the former England captain admitted that a move to Milan represented a move back into the mainstream.

"Moving to America was a big step for me because there was a lot of people who were criticizing the move, but I still believe it was a move where I wanted to challenge myself and I was able to challenge myself in different ways," Beckham told a packed press conference in Milan.

"But I have always said that I would always miss playing at the highest level. I'm not saying that in America they won't get to the highest level -- it will take time and it will happen. But with five months off during the season I personally can't do that.

Beckham, who began the press conference by addressing the assembled media with a few words in Italian, will be in the stands to watch his new team take on Udinese on Sunday.

He will then join them at a training camp in Dubai and could make his debut when the Serie A season resumes with a trip to Roma on January 11.

The former Manchester United and Real Madrid midfielder added: "I'm really happy to be here, it is a great honor. I hope to add to the team, I hope to give everything that I've always given in my career.

"I've been very lucky in my career to have done that, and I'm just going to enjoy it because I think to be given this opportunity is incredible." added Beckham.