The science of a golf ball

LONDON, England (CNN) -- It may seem like the most simple of objects, but a golf ball is a feat of modern engineering. 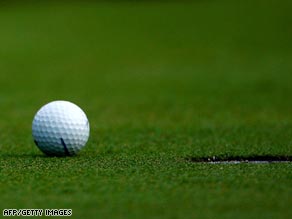 It may look ordinary, but the modern golf ball is the result years of tweaking and testing.

From its first incarnation, when golf involved hitting a stone with a stick, the ball has been evolving to allow players to get the most out of their swing and stay competitive at all levels of the sport.

We've compiled five fast facts about the humble golf ball that will show you it is more complex than it may seem.

1. Top of the range balls consist of four parts

Today's ball is the result of centuries of design and engineering. It consists of an inner core of rubber, a softer outer core, a much harder, ionomer mantle and a soft polyurethane cover.

The separate parts interact to improve the efficiency and control of the ball.

Dr. Martin Strangwood, senior lecturer at Birmingham University and member of the International Sports Engineering Association researches the technology employed in golf, and told CNN: "We're really reaching the limits of what we can do with the current technology."

He also told us that, though in the early 2000s advancements in ball technology meant an increase in drive length, since then there has been little or no change in the average distance off the tee.

2. On the tee a ball is compressed by approximately a quarter of its diameter

Though it seems sturdy enough, a golf ball's shape changes dramatically when struck by a club.

The rubber that forms the core deforms under the force of the club and absorbs a great deal of the energy from the player's swing.

Even though the ball returns to its original shape, over time a ball will deform permanently and need to be replaced.

3. The harder the ball, the further it goes

Though you may think your drive distance relies solely on how hard you hit the ball, the ball itself plays a very important part in the process.

"If you deform a rubber and then release it -- so as it's hit by the club head it compresses down and then it leaves the face, and so it returns to a spherical face -- that loses energy. The more you deform it, the more energy you lose," explained Dr Strangwood.

The more the ball keeps its integrity, the more efficient the ball is, and therefore the further it will travel after being hit.

4. The softer the ball, the more control you have

The trade-off for drive distance is ball control, and if you really want to compete you need your ball to deform as it is hit.

When you want to play a lofted shot, using a wedge or an iron -- when placement is more important than the amount of ground you cover -- you need to be able to put spin on the ball. Spin relies on getting the ball to deform into the face of the club, which a harder ball won't do.

"In order to get enough backspin, you have to have a big enough contact area and you have to have the cover going into the grooves," says Dr Strangwood. "If you had a very hard ball, even if it had a soft cover, it wouldn't be interacting with very many grooves, so you do actually need it to deform a certain amount."

So the eternal debate when choosing a ball is whether to go for one that will give you maximum distance off the tee, or one you can control when it comes to getting on the green.

They give the ball its distinctive look, but the dimples are more than just decoration -- they are another part of the golf ball's intricate design.

A ball through the air experiences wind resistance, which affects its flight. When that ball is spinning, the wind resistance causes it to fall short of where you would imagine a non-spinning ball would land.

The dimples reduce the drag the air has on the ball, and gives even the shots played with major backspin a much truer trajectory.