(CNN) -- Just as consumers are becoming increasingly tech-savvy, so are the brands that target them. 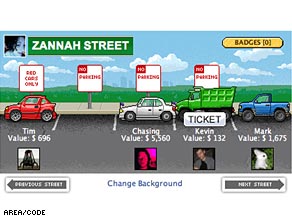 In Facebook Parking Wars, some players reportedly get up in the middle of the night to move their cars.

Puma calls sports fans with their favorite team ring-tone to connect them with 10 other fans every time their team scores. The Discovery Channel lets online adventurers encounter live sharks via GPS. A&E Television invites Facebookers to earn money by parking, legally or not, on their friends' streets. Domino's Pizza challenges YouTubers to hunt down the Saab convertible they can buy on eBay for $9.99.

But look behind the brands, and you'll find the creative and technical engineers of these compelling ad campaigns, whose toolbox of ideas is overflowing.

"The technology is just a vehicle to adapt to how people spend their time, and to be a part of that experience," says David Rosenberg, director of emerging media for veteran advertising giant JWT.

HSBC offered up its own real estate to transform the building's storefront into a living theater, where actors would repeatedly perform the same scene -- a beauty contest, a yoga expert, crazy football fanatics -- in three different windows.

Passers-by were invited to express their points of view on the scenes by texting via interactive SMS their personal reaction to what was going on in front of them, and these words were then flashed above the windows for all to read. Other people would then react to these words, perhaps at the same time posing for the provocative paparazzi.

"There was a Web component as well," recalls Rosenberg, "but it probably wasn't as visceral as that experience, in a very localized way."

"Social interaction is made out of people and their imagination, communication and desire," say Kevin Slavin and Frank Lantz, the co-founders of Area/Code, a New York-based start-up founded in 2005.

"You can play chess every single day and it will never get old. That's because it's a system that allows people to interact with people -- through the stylized interaction of games."

Area/Code's most recent promotion, just launched in September 2008, is the game Backchannel for MTV, in which players are simultaneous viewers of the live TV show "The Hills." As people watch the show, they type live comments on the site and score points depending on how many fellow viewers click on their humorous, irreverent or insightful "tags."

"If you're in the TV business, you either see [the Internet] as a threat--in which you have to compete for attention--or an opportunity, in which you can figure out how to get them to echo each other, make each other more meaningful," comments Area/Code.

"The reality is that TV does something that no other medium in the world does--it gets 5 or 10 million people to do the same thing at the same time. The question is, how do you connect these people together? That's what the Internet is good for. The online world can take those 5 or 10 million people and connect them to each other to have experiences we've never seen before."

One of Area/Code's most successful games is Facebook Parking Wars, named after the TV show that premiered on AETV, preceded by the social networking site on which it's played, with more than 400,000 people signing up to play in two months.

Not only do players get credit for parking fantasy cars on their friends' streets, they can collect fines by ticketing illegally parked vehicles on their own streets. Some players reportedly even get up in the middle of the night to move their cars.

One of Area/Code's cult games is Sharkrunners, which features real sharks swimming wild in the sea to be "encountered" and studied by players at the helm of imaginary research boats.

"No one came to us and said: 'We want to make a game that uses sharks with GPS receivers on their fins,'" says Area/Code. "[The Discovery Channel] asked for help in making Shark Week bigger."

"People will look back at games produced between 1980 and 2000 or so, and think: Yes, it was strange, people used to play games that were trying to simulate the whole world right there on a computer screen, and they would play them alone," reflects Area/Code.

"We love those games, but we're interested in everything that comes after that."

It was this active interest that led to the birth of Area/Code three years ago.

"It was before the Wii, before Guitar Hero, and it was before a mass-adoption GPS phone here in the U.S.," say Slavin and Lantz.

"But the steps that led to those innovations were clear to us. In 2005, it was obvious that the most interesting developing technologies were those which blur the line between the tangible and concrete (the area) and the digital and dynamic (the code)."

They add: "One thing we haven't worked with yet, but remain excited about, is RFID, when things start to connect with other things, or with people..."

Such is the value of real space, that even today's hard-core Netizens are willing to forego the immediate gratification of real time -- swapping e-mail for "snail mail."

Boredomresearch has been showing off its high-tech carrier snails equipped with 20-millimeter radio-frequency identity (RFID) disc tags for its RealSnailMail experiment.

How it works: People e-mail a message to a dispatch center, which is then mechanically assigned to one of several gastropod "agents," who eventually wanders across the 50-centimeter enclosure and drops it off on the other end, where another piece of hardware collects the message and promptly hurdles it back into cyberspace.

"You understand that a diminutive mollusc will be burdened with the task of forwarding your message and have given reasonable consideration to the value of your message," state RealSnailMail's terms of use.

"You understand that a considerable time may elapse between sending a message and its receipt and have considered the implications of this for yourself and the recipient."

With some 6,000 e-mails in the queue, the current average delivery time for a message is 83.22 days.

All that's missing now is the branding.