Synthetic biology inches toward the mainstream

HONG KONG, China (CNN) -- As bioengineers continue to build things with the stuff of life itself, the rest of the world is slowly waking up to the power of synthetic biology. 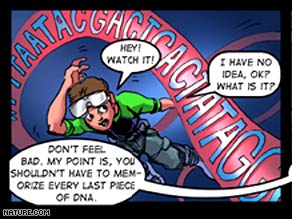 Panel from the educational comic book "Adventures in Synthetic Biology"

While students tinker away in labs making bacteria turn red or green, many more developed commercial enterprises are already working towards potentially revolutionary projects, such as making the components of renewable, portable fuels and medical treatments for epidemic diseases.

It's no wonder that venture capitalists are already knocking at their doors.

What is synthetic biology?

In a nutshell, synthetic biology is the rational engineering of biological parts, devices and systems, by programming DNA to design and re-design organisms to do what we want them to do -- something like using a computer to rewire living things, and by extension, to create new ones.

"Synthetic biology is just biotechnology done better, faster and cheaper,"sums up Talli Somekh of Musea Ventures, which he co-founded in 2007 in order to create and invest in new companies in the field of alternative energy.

"There's an element of irrational speculation about synthetic biology, because people seem to think that it's something entirely new and revolutionary. But the truth is that it's really just applying principles of disciplined construction to something that has for too long been a lab science."

"The goal is to make all of biology easier to engineer," says Drew Endy, assistant professor of bioengineering at Stanford University and president of the BioBricks Foundation (BBF), a nonprofit organization dedicated to the "open source" development of synthesized biological parts.

"Over time, the application space becomes anything that biology can manufacture. It's like looking at an Apple computer in 1975 and saying, 'What do we use this for?'"

So far, ideas aren't lacking. But before we can expect pet cyborgs, a cure for cancer and the end of global warming, we need to take life one cell at a time.

One petri dish of innovation is the iGEM (International Genetically Engineered Machine) competition, held every year by BBF since 2003, in which student teams use BioBricks to design new biological systems that operate in living cells, as well as contribute new bricks to the registry.

This year's iGEM sees 84 teams of some 1,000 participants from 21 countries across Asia, Europe, Latin America and the U.S., who will present their projects at the iGEM Championship Jamboree at the Massachusetts Institute of Technology on November 8-9, 2008.

Among them, the HKUSTers, a team of post-graduate, undergraduate and high school students representing the Hong Kong University of Science and Technology, is engineering a "gambling" cell baptized the Randomizer, based on the principle of randomness in nature.

When stimulated, the bacteria will turn either red or green in color, simulating the metaphorical flip of the coin. Using this binary logic, multi-digit random numbers can be generated.

HKUSTers team leader Professor King L. Chow says the Randomizer uses about 12 existing BioBricks and will contribute about four or five more useful ones to the registry. Ultimately, one could imagine these new biological parts being applied to the creation of a living supercomputer.

However, "the cells don't always behave like we want them to behave," Chow admits, describing the many trials and errors of working in the lab.

"So you see, we still have a long way to go before creating entirely new organisms."

That's still one small step for HKUSTers; one potentially giant leap for bioengineering.

Another application in progress is spider silk, currently being synthesized by a team led by Chris Voigt, assistant professor in the department of Pharmaceutical Chemistry at the University of California, San Francisco.

"Spiders make threads that are stronger than steel, elastic, that can be stretched three times their length before they break," he says.

"They have all these properties that we'd like to harness, but you can't go to the spiders because they don't make enough material. It's also still very hard to genetically engineer spiders themselves. So you would like to take out the silk and maybe put in little pieces of protein to bind human cells, so that you could use this material to make a medical device.

"You could imagine a pacemaker made out of silk. So you have a bacteria that grows very fast and produces a lot of material, which you can put into a big steaming vat and then collect the silk that comes off of it."

Synthetic biology is already being applied to the biotechnology industry, which is divided into three sectors of white (manufacturing, energy, materials), red (medicine) and green (plant-based).

"The synbio movement is developing strategies to make biotechnology more cost-effective," points out Musea Ventures' Somekh. "Applying engineering principles to biotech has the potential to allow it to economically cross over into biofuels, industrial chemicals and other areas where petroleum is dominant. As a result, the available market of biotechnology will increase from the billions to the trillions."

"The reason why synthetic biology is so important for industrial biology is because of its economics," he adds. "Biotech has been successful in human health because investors can get a return on the $100 million-plus they have to invest in the R&D stages of product development due to the fact you can sell a few grams for very high margins. In industrial biotech (biofuels and chemicals), you are selling tons of product for very low margins. So we have to be much more capital-efficient in the early stages."

Red biotech is another emerging market with a fundamental human interest.

Amyris Biotechnologies, which defines itself as "a renewable products company devoted to creating a more sustainable world," has partnered with the nonprofit pharmaceutical Institute for OneWorld Health, Sanofi-aventis and the University of California, Berkeley, in a nonprofit initiative to develop a more reliable and affordable cure for malaria, following a $42.6 million grant from the Bill & Melinda Gates Foundation in 2004.

The Artemisinin Project aims to reduce the cost of antimalarial drugs by developing a second source of artemisinin, the treatments' key ingredient. However, artemisinin must currently be extracted from the sweet wormwood plant in a complex and time-consuming process.

Amyris bioengineers will take the genes out of the plant and cultivate them in yeast so that they grow more quickly and efficiently, while Sanofi-aventis will produce the drugs on a large scale.

The German-based Geneart, spun off from a research group located at the University of Regensburg, launched on the gene synthesis market just a few years before the completion of the 13-year Human Genome Project (which consisted primarily of identifying all the approximately 20,000-25,000 genes in human DNA).

"When we started our company in 1999," recalls Geneart co-founder Marcus Graf, "synthetic biology as a term didn't exist, [especially on] an industrial scale, but we knew that there was a great demand for rationally designed and swiftly synthesized genes.

"After having read the 'human book' it was necessary to give meaning to its content -- testing the genes and finding their functions, etc. However, the speed of sequencing by far outperformed conventional methods of gene cloning. The next generation of sequencing methods, which allow to fully sequence a human genome in just weeks, will generate an even greater demand for synthetic genes."

From biosafety to biosecurity

Of course, tinkering with the stuff of life itself always tends to raise eyebrows, if not alarm bells, among the public.

Common ethical issues include the safety of both the bioengineers who design the cells and the people who use the products; the equity of access to biotechnology and the distribution of its benefits; the morality of "fooling around with Mother Nature" (notwithstanding activist groups such as "Theologians for Stem Cells"); and finally the much-hyped security threat of bioterrorism.

When it comes to biocriminal activity, however, Geneart's Graf is not much worried for now.

"We screen in a Din ISO 2001 certified process every gene ordered, every customer who's ordering, and we are in close contact with law enforcement (e.g. lists provided by our German authorities exclude customers from distinct countries, persons and institutions)," he says.

"Furthermore, export of certain materials outside of Europe require formal approval from our local authorities. Compliance with such regulations is strictly controlled by the regulators (e.g. surprise visits). Non-compliance with these rules is liable to prosecution.

"All future synthetic biology applications are cutting-edge science, and it is extremely unlikely that terrorists will rely on such hard-to-learn and hard-to-come-by techniques. Synthetic biology is more likely to attract Nobel prize winners than terrorists."

Yet so many new questions have already arisen from the exponentially evolving science of synthetic biology that for the first time this year, the Fourth International Meeting on Synthetic Biology (SB4.0), held at HKUST from October 10-12, 2008, invited not only the scientific community but also those outside and around it to discuss these specific issues.

"The synthetic biology community is very energetic and collaborative," says Karl Handelsman of CMEA Ventures, whose mission is to provide venture capital funding to innovative start-ups in life sciences, technology and energy. "It's a utopian nerd heaven."

Given all the potential of synthetic biology's applications, it's no wonder the investors outnumber the entrepreneurs.

"Now there is so much interest by investors that it's hard to assess exactly how many companies are out there. There may be four companies under the radar for every one on the radar."

Meanwhile, new students from diverse disciplines are flocking to the field.

"Biotechnology is cool. Synthetic biology is cool," confirms Endy, synbio's most outspoken advocate. "They want to come help make stuff. The applications are important. There's a lot of potential to help the world. The challenge is giving them the right lessons, curriculum, mentoring, so that they can quickly get up to the point where they can do good work, and teach still more people."

Today, synthetic biology's biggest obstacle is not ethics, not funding, not industry, and certainly not interest -- it's qualified, productive human capital capable of developing the community and advancing the technology. In more ways than one, the keyword is "constructive."

The rest of the world shouldn't be disappointed.

All About Biotechnology • Life Sciences • Biology