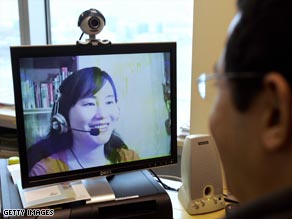 Bringing Skype to the workplace is just one way companies are harnessing "fun" tech.

Employees in the office used to ponder this question about corporate technology not easily available to consumers.

Today the question, usually asked from home or a cafe, is: "Why can't I do this at work?"

Corporate IT departments meanwhile often seem oblivious to their potential usefulness, even as workers wonder at their absence. But increasingly such technologies are being used for business.

Partly this is because enterprise versions have emerged with fancier security features. And partly it's because as the consumer-side versions keep growing, new users continue to come from within small companies -- or even large enterprises, often to the horror of security-conscious IT departments.

Twitter, the popular micro-blogging service, has seen the emergence of small copycat services focused on businesses.

Yammer, for instance, claims to have better security than the free Twitter, and it charges a small per-head fee.

Users, rather than answering the Twitter question of "What are you doing?" for anyone to read, answer "What are you working on?" for colleagues only to read.

Wikis, online pages that any user can edit, surged in popularity among consumers thanks partly to the online encyclopedia Wikipedia. Not long after businesses hopped aboard with tools geared for them.

One of those, PBwiki, has seen the number of individual business wikis created with it jump to well over 40,000, up from less than 20,000 a year ago and only about 5,000 two years ago.

A Los Angeles design firm called The Groop, which uses PBwiki for creative collaboration among teams and clients, claims to have realized $1 million in annual productivity gains with it.

On the social networking side, Facebook and MySpace became household names seemingly overnight.

This year businesses are expected to spend more than $250 million on social networking tools geared towards them, from vendors like Awareness, Communispace, and Jive Software, according to research firm Forrester.

And increasingly vendors offer companies suites of Web 2.0 technologies that have emerged on the consumer side.

For instance HiveLive lets employees create and control blogs, wikis, mash-ups and so on within business social networks.

Skype, the online phone service bought by eBay, noticed that many of its customers were small businesses. To entice more of them, it created a business version of its software with improved security and a "control panel" application for central management of Skype credit and numbers.

Last month Google launched a YouTube-like video sharing service for businesses. The idea is that employees can share videos amongst themselves in a secure setting. A CEO could broadcast a message, for instance, or a technician could post a how-to video.

The iPhone, inevitably, is also forcing its way into the work force. "The best phone for business. Ever" claims the typically bomb-throwing ad copy from Apple.

Among them are desktop video-conferencing, virtual worlds, 3-D controllers, and augmented reality.

Gartner analyst Jackie Fenn suggest IT departments should make it their ongoing strategy to take advantage of such consumer technologies, rather than bump into them on a case-by-case basis.

Besides, there's a nice upside to this approach for IT workers, as long as security and other challenges can be overcome.

As anyone who's played around on Facebook, YouTube or an iPhone can attest to, the consumer side is where all the fun stuff is.

All About Blogs and Blogging • Social Software and Tagging