HAIFA, Israel (CNN) -- A new Web site launched by an Israeli university professor and his Bedouin students aims to address life's everyday quandaries from the perspective of an ancient sacred text: the Quran. 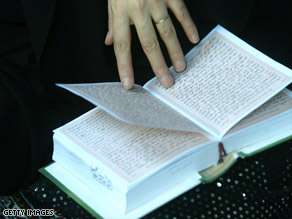 An Israeli professor and his students have launched a Web site to promote the teachings of the Quran.

Organizers of the site, Quranet.net, say they hope it will serve as a "bridge between Islam and the West" by applying the wisdom of Islam's holiest book to modern-day problems.

"We try to transform the Quran into a modern and useful tool, so that every person can find a Quranic answer to modern psychological and educational queries," said Ofer Grosbard, professor at the Academic Arab College for Education, affiliated with Haifa University.

Quranet divides chapters of the Quran into topics such as "Loss, Illness and Tragedy," and provides answers to such questions as, "Is loss an excuse for aggression?" and "What can we say to someone who refuses to accept a gesture of peace?"

The questions are answered with a relevant Quranic verse, followed by an educational-psychological explanation of the issue.

Quranet seeks to illustrate "the beauty of the Quran," said Grosbard, who believes the book's positive messages have been overshadowed by Islamic fundamentalists who've manipulated the text as a justification for terrorism.

The professor came up with the idea for Quranet while teaching a class on developmental psychology to Bedouin graduate students.

He was approached one day after class by Bushra Mazarib, a young Bedouin woman.

"Do you want me to tell you the truth?" she told Grosbard. "Nothing of what you are teaching me will help when a parent may come to me and say, 'The devil has gotten into my son.' "

Western thought and psychological explanations do not speak to a Bedouin Arab's everyday problems, explained Mazarib. The only way to address the issues facing Bedouins -- nomadic Arabs from the deserts of North Africa -- lies in the Quran, she said.

Mazarib plans to work with Bedouin parents as a school counselor. She believes the words of the Quran hold the key to addressing every question those parents may have.

"I want to explain something to parents in a language that they will understand. They don't understand psychology, they only understand the Quran," she tells CNN. "We believe [the Quran] is from God and you cannot question it."

Grosbard was taken with the simplicity of Mazarib's challenge. Soon, he doled out a new assignment: Each of his Bedouin students was to extrapolate the most educational and inspirational verses from the Quran and come up with a short story exemplifying their practicality.

His students were up for the task, returning to class with hundreds of stories from the Quran "that only a Bedouin knows how to tell," Grosbard said.

Storytelling is an intrinsic part of Bedouin culture. Bedouin Arabs, scattered throughout the Negev and Sinai deserts, make up a largely agrarian community.

Some Bedouins, such as Mazarib, live in modern luxury, but the majority live in the same type of rudimentary tents that their ancestors lived in hundreds of years ago.

Before television took over some of homes, extended Bedouin families would sit in the Den, or Diwan, exchanging stories for hours. Grosbard used his students' material to create the Quranet site and its companion book, "Quranet: A Guide for Education."

He hopes Quranet will provide practical advice to help the Muslim community deal with such issues and problems as adolescence, grief, incest, infidelity, violence and tolerance.

Quranet has received praise from prominent sheiks, who wrote a foreword to the book, and the Israeli government, which endorses the project on its Foreign Ministry Web site.

Some Arab media, however, urge Muslims to be wary of an "Israeli Web site" that interprets the Quran to serve the "political agenda" of Israel. Politics aside, the idea of Jewish scholars interpreting or translating Islamic texts is nothing new, said Professor Akbar Ahmed, chair of Islamic Studies at the American University in Washington, D.C.

"Anything that furthers understanding, furthers bridge- building, furthers interfaith friendship is to be encouraged," said Ahmed, who believes some in the Muslim world are bound to be skeptical given the delicate nature of interpreting holy texts.

"If this project has been handled with sensitivity, then Muslims need to look at it on its merit," he said. "Before judging we need to give it a chance."

So far, Quranet is a fledgling site, with no search function or interactive features. It's also written mostly in English, with some passages in Arabic and Hebrew.

Grosbard is seeking funding to expand the site and envisions future Quranet versions in Arabic, Hebrew, Turkish and Persian.

As the Internet becomes more readily available in homes worldwide, Mazarib and Grosbard agree the future of Quranet is infinite. "After all," Grosbard said, "there are over 1.5 billion Muslims in the world."

All About Israel • Religion