SOUTH SAN FRANCISCO, California -- Fossil fuels that keep our planet running -- oil, natural gas and coal -- were created from the decomposition of plants, plankton and other organic material over millions of years. 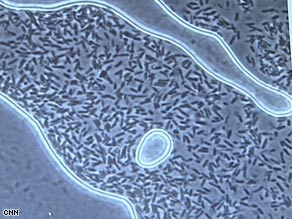 A California lab has developed genetically altered bacteria that eat sugars and excrete a form of diesel oil.

Today, scientists all over the globe are working to create fuels with the same properties but without that pesky 100 million-year wait. And "renewable petroleum" is now a reality, on a small scale, in some laboratories.

The biotech company LS9 Inc. is using single-celled bacteria to create an oil equivalent. These petroleum "production facilities" are so small, you can see them only under a microscope.

How does it work? A special type of genetically altered bacteria are fed plant material: basically, any type of sugar. They digest it and excrete the equivalent of diesel fuel.

Humans have used bacteria and yeast for centuries to do similar work, creating beer, moonshine and, more recently, ethanol. But scientists' recent strides in genetic engineering now allow them to control the end product.

The company is focusing on diesel fuel, but the microbes can be "programmed" to make gasoline or jet fuel.

The bacteria used are a harmless form of E. coli. And the feedstock, or food for the microbes, can be any type of agricultural product, from sugar cane to waste such as wheat straw and wood chips. Choosing plants with no food value sidesteps one of the biggest criticisms of another synthetic fuel, corn ethanol, because critics say that corn should be used as food, not fuel.

It takes a lot of microbe poop to fill a gas tank, however. Biofuel experts say that processes like those used at LS9 are scientifically viable but that there's still a long way to go before they can address global energy needs.

"Scalability is really the critical issue," said Robert McCormick, principal engineer at the U.S. Department of Energy's National Renewable Energy Lab in Colorado. "If you've got something that you can make work in a test tube, that's good, but you've got to be able to make it work on a very large scale to have an impact on our petroleum imports."

But del Cardayre says his product has other benefits over traditional fossil fuels.

"What we've done is make the same molecules from renewable sources, so that it can go into the existing infrastructure, be made domestically and in an environmentally friendly way. That's the goal," he said.

The LS9 product does not have the cancer-causing benzene that is in other fossil fuels and has far less sulfur, he said.

LS9 President Bob Walsh says that using existing petroleum pipelines is crucial. Ethanol, for example, requires its own distribution system because it can corrode oil pipelines.

"You can't put ethanol in a pipeline, [and] even your car needs some adjustments to it; whereas the product we're making is going into the existing system, and that's a big difference," he said.

LS9 expects to be in large-scale commercial production in three or four years. But del Cardayre is the first to admit that microscopic oil fields are not a silver bullet for the world's energy woes.

"I doubt we're going to completely eliminate our dependence on oil, but we'll certainly be able to supplement the amount of oil we need in the short term," he said.

Although energy researchers are spending tens of millions of dollars in venture capital, McCormick believes that "just making more" is not enough.

"I think that the answer to reducing our petroleum-import problem and reducing the carbon emissions from transportation is really threefold," he said. "It involves replacement fuels like biofuels, it involves using much more efficient vehicles than we use today, and it involves driving less."

One thing that McCormick and del Cardayre agree on is that energy research is a great place to be these days if you are a scientist.

"The fun of the challenge from the science perspective is that you do have farmers and biologists and entomologists, and biochemists and chemical engineers, and process engineers and business people and investors all working to solve this, and it ranges anywhere from a political issue to a technical issue," del Cardayre said.

"We all have to pool our various talents and training and try to come up with a whole new system of producing energy," he said. "And the current energy price environment has made literally everyone interested in replacements for petroleum."

All About Alternative Energy Technology • U.S. Department of Energy