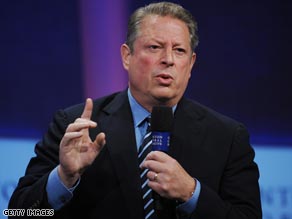 Speaking at the opening plenary session of the Clinton Global Initiative Annual Meeting in New York, Gore said: "If you're a young person looking at the future of this planet and looking at what is being done right now, and not done, I believe we have reached the stage where it is time for civil disobedience to prevent the construction of new coal plants that do not have carbon capture and sequestration."

Gore, whose words were met with cheers and applause, believes that the world has fallen behind in tackling climate change in the last year. "This is a rout," he said. "We are losing badly."

The 2007 Nobel Peace Prize winner went on to heap criticism on what he described as "carbon companies" who "spend money convincing the stock-buying public that the risk from the global climate crisis is not that great". He argued that this amounted to "a form of stock fraud because they are misrepresenting a material fact".

In an era of expensive and insecure energy, coal remains a cheap and secure energy source for governments all over the world.

But Gore, who said that "clean coal" was like "healthy smoking", is convinced that we need to change our habits now.

"What we should do is make a one off investment to switch our energy infrastructure from one that depends on fuel that is dirty, dangerous, destroying the habitability of this planet and rising in price, to a new global energy infrastructure that is based on fuel that is free forever -- the sun, the wind and geothermal. There is a myth that the technology is not available. It is available," he said.

He called on the United States and other countries to install unified national transmission grids and make renewable energy available to all.

"If the coal companies can actually sequester CO2, and safely, then ok," Gore said. "But don't pretend to do it. Don't give us this illusion.

"We have a responsibility to those who come after us and those who are suffering today, to knit together a global commitment to solve this climate crisis and use it as a way to stimulate the economy."