LONDON, England (CNN) -- Researchers have developed a new anti-reflective coating that boosts the efficiency of solar panels and allows sunlight to be absorbed from almost any angle. 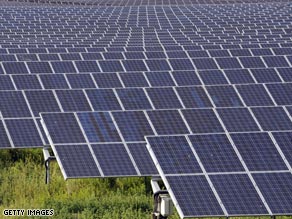 Scientists from the Future Chips Constellation (FCC) at the Rensselaer Polytechnic Institute in New York have created the coating using nanotechnology -- engineering devices on a molecular scale.

They are hopeful that it can transform the solar energy market in the coming years.

A typical untreated silicon solar cell absorbs just over two thirds of the sunlight it receives. But with the FCC's nanoengineered coating, that figure rises to 96.21 percent.

In their paper: "Realization of a near perfect antireflection coating for silicon solar energy utilization," published in the scientific journal Optics Letters, researchers report that gains in absorption were consistent across the entire spectrum of sunlight -- ultraviolet, visible light, and infrared.

"To get maximum efficiency when converting solar power into electricity, you want a solar panel that can absorb nearly every single photon of light, regardless of the sun's position in the sky," said Rensselaer physics professor Shawn-Yu Lin, and head of the FCC research team. "Our new anti-reflective coating makes this possible."

Comprising of seven tiny layers, each 50 to 100 nanometers in height, the coating is made of silicon dioxide and titanium dioxide nanorods positioned at an oblique angle.

The FCC team found that stacking the coatings one on top of another enhanced the anti-reflective properties of each layer. Having a series of layers also helps to "bend" the flow of sunlight which assists in capturing light that would otherwise be reflected off.

Lin, an expert in nanostructure photonics and a pioneer in the field of photonic crystals, says that the new coating could be applied to just about any photovoltaic material.

Conventional solar technology has thus far dictated that solar panels be mounted on south-facing roofs, or in locations where the sun source is unrestricted and strong. But this new coating could change all this.

It would also mean that large scale solar farms, like the giant array in Alentejo, Portugal, could increase their output while saving on energy used to track the sun.

"The anti-reflective coating requires multi-layer coatings which are slightly more complex than the typical single-layer ones," Lin told CNN. "However, the thickness of each individual layer does not need to be precise. This makes manufacturing easier."

Lin is currently exploring partnerships and licensing arrangements, and estimates the product could be on the market as soon as the next two to three years.

"The economics of modern day solar cells depends largely on the thickness of the substrate (500 - 1000 micrometers) and the processing cost for making the junctions. Our coating has a thickness of 0.7 to 1 micrometer. The additional cost for incorporating our antireflective coating should not exceed two to four percent of that for existing solar cells," Lin said.

The only downside that Lin and his team have found so far is that the nanorods can be fragile. Future research will focus on protecting them better and investigating the use of a thin porous film to make them more robust.

In response to the paper's publication, Professor Darren Bagnall from the Nanoscale Systems Integration Group at the UK's University of Southampton told CNN, "It's a really impressive surface, and to get down to reflectivity from all angles of 3.5 percent is pretty impressive. But it's really only going to deliver maybe four or five percent more power from the solar cell."

Bagnall is himself trying to nanoengineer surfaces for solar cells by mimicking the surface of moth eyes, which possess excellent antireflective surfaces.

He says that the FCC paper is only talking about the amount of light that's transmitted to the device, not the efficiency of the device itself. "Reflection is a relatively small part of the problem," he said.

"I've seen this before from other university research groups and there is a world of difference between nice results in the lab and commercially viable products," Leggett said. "But at some point one of them is going to work."

Leggett believes that the future is already very bright for the solar industry. He says that $150 billion was invested in renewable energy last year, with $28 billion of that going to photovoltaics.

All About Nature and the Environment • Energy Technology