Mixed signals from NASA about fate of Mars rover 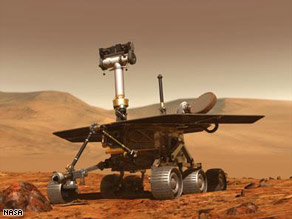 An artist's concept of one of the Mars Exploration Rovers on Mars' surface.

Initially the Rover program's principle investigator, Steve Squyres, said one of two vehicles operating on the planet will be suspended because of the cut. He said he learned he would have to trim $4 million from the program's $20 million budget.

He said the move would probably force the rover Spirit into hibernation.

But, he said, the rover could be reactivated if funding is later restored. Squyres also said the cuts would mean layoffs among a staff of 300 scientists who operate and analyze the rovers.

But shortly after CNN.com published the story, NASA administrator Michael Griffin said the agency will not shut down one of the two Mars rovers, according to spokesman Bob Jacobs.

"There is a process that has to be followed for any mission to be canceled and the cancellation of the Mars Exploration Rovers is not under consideration," Jacobs said. "There is an ongoing budget review within the agency's Mars exploration program. However, shutting down of one of the rovers is not an option."

NASA headquarters spokesman Dwayne Brown confirmed the budget directive had been issued. The cut's purpose is to offset cost overruns with the Mars Science Laboratory, a rover set to launch next year, he said.

Spirit was designed, along with its twin, Opportunity, to be a robotic geologist. The rovers have examined Martian rocks and soil, looking for telltale signs of water.

Opportunity hit pay dirt when it found evidence that salty sea once stood in the area now called Meridiani Planum.

NASA spent $800 million to build and launch Spirit and Opportunity to Mars. They landed about three weeks apart in January 2004, on opposite sides of the planet. Both were designed for 90-day missions but are still operating more than four years later.

Squyres also said he has been told to expect an $8 million budget cut in fiscal year 2009. E-mail to a friend