LONDON, England (CNN) -- It may have taken the "right stuff" -- a macho blend of youthful bravado and reckless adrenaline -- to get the first people into space, but if you want to be an astronaut today, be warned, it's no longer a young man's game. 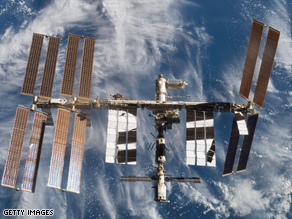 ESA's Columbus lab is attached to the International Space Station.

"Forty five is the best astronaut age," says Gerhard Thiele, an experienced spaceman who, as flight operations chief for Europe's answer to NASA, now commands a team with an average age of 50.

You wouldn't know it to look at the fresh-faced applicants who turned out at the launch of an European Space Agency recruitment drive in London on Thursday, but age is clearly an issue for would-be astronauts among the thousands ESA hopes to attract.

While successful candidates are expected to visit the International Space Station in the near future -- spending up to six weightless months cruising above Earth's atmosphere in ESA's new Columbus lab -- they won't fulfill the ultimate goal of visiting the moon, and eventually Mars, until much later in their careers.

"Let's make the assumption that humans will be walking on the moon in the 2020s, if you look at the age of the applicants -- let's start with 35 -- in 10 years from now they are aged 45, which is the best astronaut age," elaborates Thiele, still pushing the final frontier himself at the age of 54.

And while you didn't exactly have to be a rocket scientist to join the original space missions (the U.S. Mercury and Apollo programs recruited many test pilots), if you want to stand a chance against other heavily-qualified applicants, it's certainly an advantage.

"I already have a masters degree in physics and astrophysics a PhD in astronomy, I'm a scuba diver, I speak basic beginner's to advanced Russian, and I have flying experience," one hopeful, Tracy Parker, tells CNN.

ESA expects up to 50,000 people to apply to become one of its new astronauts when online applications go live on May 19. A rigorous battery of medical, psychological and physical tests is expected to whittle these down to a final 40.

Even to make it to the prodding and poking stage, candidates will have had to brandish qualifications including, says ESA: "A university degree in natural sciences, engineering or medicine, and preferable at least three years of related postgraduate professional experience, or flying experience as a pilot."

For those who make the cut, the pay is good, if not exactly out of this world.

Astronauts will enjoy a basic salary of at least $80,000, but according to ESA human resources chief Frank Danesy, there is unlikely to be overtime for those six-month Space Station stints.

Would-be astronaut Parker, who has dedicated her life to becoming an astronaut since watching the movie "Space Camp" at the age of 12, insists blasting-off would be reward enough.

Despite the likely stiff competition Parker, 29, says she "hands down" expects to one day make it into space.

"For so long I've looked up and seen the moon, and to actually get out there ... that's going to be such an amazing feeling."

Would you want to be an astronaut? Would you want your children to become astronauts? Leave your views and comments in the Sound Off box below and we'll publish the best.