Where the travel deals are 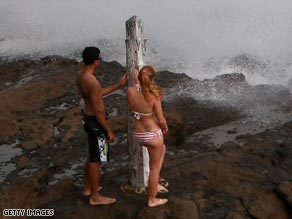 Some tour operators are offering packages to Hawaii at prices lower than a year ago.

The economic downturn has dealt a heavy blow to the global travel industry as travelers have tightened their grasp on their wallets.

But there is a silver lining to the meltdown. The turmoil has roiled currency markets, making some once-pricey trips more affordable.

Other popular spots are rolling out deals and special packages in a bid to lure travelers.

Whether you're paying in dollars, pounds or euros, there's a travel deal out there for you. Here's a look at four of them.

Iceland was once prohibitively expensive for many people, but now the tiny island nation is rebranding itself as a budget destination.

Iceland's economy was booming a few years ago, fueled by the availability of cheap credit. But the collapse of the country's financial system has reversed its fortunes.

The government has nationalized the banking system and the Icelandic currency -- the krona -- went into freefall. Now the Icelandic Tourist Board is wooing travelers by highlighting the favorable exchange rate.

Icelandair is offering a Christmas special for travelers from the U.S. The package - which includes airfare, a three-night hotel stay, a visit to the Blue Lagoon and airport transfers - starts at $699 a person for a double room.

For European visitors, it's promoting a number of three-night city breaks (flights and hotel included). Packages from London start at £249.

The downturn in the U.S. has hit Hawaii tourism hard. Visitor arrivals are expected to tumble nine percent this year, making it the biggest annual drop since 2001, according to the University of Hawaii Economic Research Organization.

Hawaii has suffered from a sharp decline in flights from the mainland. Aloha Airlines and ATA accounted for roughly 20 percent of flights to the Big Island from North America before going out of business earlier this year.

In response to slumping visitor arrivals, Hawaii's Visitors and Convention Bureau has teamed up with a variety of travel wholesalers to offer air-hotel packages.

"The savings being offered mean the cost of a Hawaii vacation can now be less than a year ago," John Monahan, the bureau's chief, said in a statement.

Liberty Travel is offering free nights at several hotels. Classic Vacations is offering an air credit of up to $500 for stays of five nights or longer booked through the end of the year.

Concerns of a deep recession in the UK have sparked the pound's decline. In the last three months, the pound -- which traded near $2 in August -- has lost roughly 20 percent of its value against the dollar.

Aside from the falling pound, some hotels are offering special promotions. The Hoxton Urban Lounge, a stylish boutique hotel located near London's financial district, routinely sells rooms for £1 a night.

But travelers should be warned: Snagging one of the rooms can be tough. The last time the hotel offered the promotion, the rooms -- which normally cost from £59 to £199 -- sold out in 26 minutes. The next sale is scheduled for January.

If you fancy a walk on the wild side, now's the time to net yourself a bargain. Amid the financial market meltdown, investors have been flocking to safe-haven investments.

The aversion to risk has hit the currencies of several emerging market economies, including the South African rand. The rand touched a record low against the euro and a six-year low against the dollar last month.

The drop in the rand means adventure trips like safaris are becoming more affordable for foreign tourists. Several luxury safari lodges have recently cropped in and around South Africa's Kruger National Park -- an ideal perch for viewing the wildlife that roams the unspoiled landscape.

A luxury tent at Tanda Tula Safari Camp currently runs around 4,250 rand per person per night. At the current exchange rate, that comes to about $430 -- or roughly $160 less than you would have paid in early August.

Have some useful travel tips? Share them in the SoundOff below.