LONDON, England (CNN) -- Turnout for the international tourism industry's most important event is at a record high this year as the sector struggles to cope with the financial crisis sweeping the world. 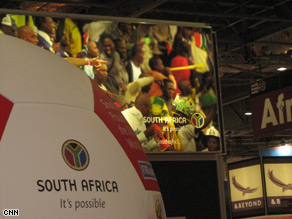 South Africa is one of 200 countries and destinations represented at this year's World Travel Market.

Industry professionals, government ministers and tourism chiefs from around the globe are currently gathering in London for World Travel Market, an international travel trade show.

This year's event, which runs through Thursday, is the biggest ever, with nearly 50,000 participants from 200 countries attending.

"When you're going through difficult times, it is still very important to market and showcase your business," Fiona Jeffery, chairman of the World Travel Market, told CNN.

"There are many companies here seeing a downturn or slowdown in business and to know you're not the only person experiencing that can be quite reassuring."

Faced with flight cutbacks, reductions in business travel budgets and a sharp decline in consumer confidence, the global tourism industry is feeling the squeeze of the economic downturn.

Global tourism slowed sharply in the summer as travelers, frightened by the financial crisis, cut back on their spending. International tourism arrivals grew less than two percent in June, July and August, down from the average growth of 5.7 percent recorded in the first four months of the year, according to the latest data from the United Nations World Tourism Organization (UNWTO).

The UNWTO predicts the situation will get worse before it gets better. The group expects growth to stall or rise by just two percent globally for all of 2009.

For 2008, the UNWTO expects demand for international tourism to grow at a rate of two to three percent, but most of that growth is expected to come from the solid performance at the start of the year.

Furthermore, with the threat of a deep global economic recession looming, the UNWTO doesn't expect the travel and tourism industry to recover until later next year.

"The economic downturn, combined with the current uncertainties, extreme market volatility and a decline in both consumer and business confidence, are expected to continue taking their toll on demand for tourism -- at least in the short to medium term," the latest edition of the UNWTO's World Tourism Barometer, said.

Practically every part of the world is showing weakness in terms of international arrivals. Asia has seen the most rapid deterioration, with the Northeast region in particular suffering a significant slowdown.

See how different regions are being affected »

Growth has also practically stalled in Europe, particularly when compared to North and South America and Africa, where the slowdown has been more subdued.

In the UK, Jeffery expects to see a reduction in capacity and a decline in package holidays, which will, she said, "lead inevitably to increased prices in 2009."

See why Americans are coming to London »

The Middle East is emerging as a lone bright spot. Growth through August appears to have outstripped the pace from the same period a year ago, according to the UNWTO.

Despite the bleak outlook, industry professionals at World Travel Market were upbeat and focusing on the positive fallout from the economic crisis.

For one, more people are expected to take trips closer to home, which could give a boost to domestic and regional travel markets.

Jeanine Pires, president of Embratur, the Brazilian Tourist Board, said it's still too early to assess what impact the financial crisis will have on Brazil in terms of international tourism.

But traffic within South America is holding up well, despite the economic turmoil. "We are keeping the traffic from Argentina, Chile, Uruguay and Paraguay to Brazil," Pires said.

More importantly, people still want to travel, which sets the current downturn apart from previous crises the industry endured after 9/11 and the outbreak of the viral respiratory illness SARS in 2003.

Cowed by the uncertainty surrounding the economic outlook, travelers are seeking more value for their money and are more likely to hold on to their cash for a bit longer than they usually might, industry analysts said.

But Jeffery said she's confident the industry will eventually bounce back.

"The travel and tourism industry has proven over the years that it does ride through recessions and major disasters, and it weathers storms remarkably well," she said.

"People will want to continue to have experiences."

All About Travel and Tourism • Economic Issues • Consumer Confidence