(CNN) -- Cindy Haynes was 42 when she made her decision. All of her life she had been a wife and a mom. Now her kids were growing up; her divorce was being finalized, and she had just landed her first real job. 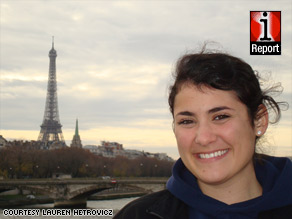 Lauren Hetrovicz, 21, stands across the river from the Eiffel Tower in Paris, France.

"I decided that there were two groups of people in life," Haynes said. "Those people who went out and did and do, and those who dream about it and never really accomplish anything. I decided to be a doer."

Now 47, Haynes has backpacked through Europe -- three times. She's been to the top of Machu Picchu in Peru. She's gone to China, New York City and a Yankees game. She has sung at the famous Cavern Club in Liverpool where the Beatles first met their manager, and she's seen the Iditarod sled dog race in Alaska.

The recent death of Dave Freeman, co-author of "100 Things to Do Before You Die," after hitting his head in a fall prompted iReport.com to ask users about places they don't want to miss. Freeman visited about half the places on his list, his relatives told The Associated Press.

Haynes is one of a number of iReporters who has ambitious travel dreams. She and others have taken cues from "The Bucket List," a 2007 movie starring Jack Nicholson and Morgan Freeman as terminally ill cancer patients who set off to achieve their lists of dreams before they die.

These iReporters are writing down places they want to go and are starting to plan how to get there. Their "things to do before I die" lists can include anything from watching more sunsets to climbing Mount Everest.

"If you put your dreams and goals on paper and try to plan to accomplish them, you can make them a reality," said Eric Shoen, a 31-year-old from Rochester, New York.

Shoen meets with a friend once a year to rewrite their bucket lists -- crossing off things they've accomplished and adding new ones. His travels have included the Grand Canyon in Arizona, Madrid and Barcelona in Spain and an economy bus tour through Italy (gelato included, of course!).

"I take one day at a time," Shoen said. "If I die tomorrow, I hope people will say that I lived a full life and had fun doing it."

If someone had died on the Liston family's most recent trip, they would have had to bury the body and come back for it later, TJ Liston said. The 48-year-old coach from Lynchburg, Virginia, took his wife, son, daughter, nephew and son's girlfriend on a 10-day canoe trip in Labrador, Canada.

All six joined a cook and a guide for a journey where humans rarely travel -- one that even the guide hadn't been on in 10 years.

"There aren't very many places in the world where you're going to go that are completely isolated and remote and still pristine," Liston said. "It's the same kind of [area] the Indians went through 300 to 400 years ago."

While Lauren Hetrovicz often sticks more to tropical climates than the frozen tundra, she's been more places in her 21 years of life than most people see in a lifetime. The recent college graduate has "walked along the Great Wall of China, looked upon Paris from the height of the Eiffel Tower, horseback rode to an exploding volcano, saw the Christmas festival in Munich, Germany, gazed upon the Acropolis and the Parthenon in Athens, Greece, then kissed the Blarney Stone for luck near Cork, Ireland."

And that's not even half of it. Hetrovicz studied abroad in four countries -- India, China, Costa Rica and Italy -- through her father's generosity and a few scholarships. The Illinois native encourages everyone to broaden their international perspective.

"You'll come back, most definitely, as a different person," Hetrovicz said. "I would say, dump the budget and travel to your dream destination because each day will pass and the opportunity will slip from your hands."