MEMPHIS, Tennessee (CNN) -- Even the FBI thought at first there must have been a conspiracy behind the murder of the Rev. Martin Luther King Jr. 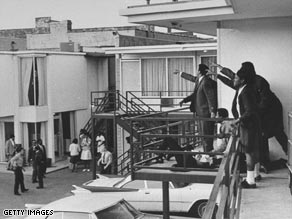 One of many conspiracy theories revolves around the man kneeling over the body in this photo.

The name Harvey Lowmeyer was on the sales receipt for the high-powered .30-06 rifle left at the murder scene, John Willard rented the room across the street from King's motel, Eric Galt drove the white Mustang out of Memphis that night.

Then fingerprints showed all three names were aliases for the same man: James Earl Ray, a small-time criminal and Missouri prison escapee.

But 40 years later, conspiracy theories still thrive. A look at five of them:

Conspiracy theory: The man in the bushes
Solomon Jones, the volunteer driver for King on his Memphis visits, told police that night he ran into the street after the shot was fired and saw a man running away in the brush opposite the motel.

"I could see a person in the thicket on the west side of Mulberry with his back to me, looked like he had a hood over his head," said Jones, now dead.

His account became the starting point for many of the conspiracy scenarios that followed.

Facts
All of King's closest aides interviewed by police said they saw no one in those bushes, which were directly below the second-floor rooming house where Ray was registered.

Among those witnesses: former U.N. Ambassador Andrew Young, attorney Chauncey Eskridge, the Rev. Bernard Lee, and local minister Samuel "Billy" Kyles, who was the closest person to King on the balcony when he was killed. All looked and saw no one in the brush across the way.

Conspiracy theory: The second gun
Loyd Jowers owned Jim's Grill, a bar located directly below the section of the rooming house where Ray was staying. Years later, Jowers would say a man came in the back door of his bar -- from those bushes -- and gave him a rifle to hide. He changed his story at least twice as to who that man was.

Ray's last lawyer, William Pepper, filed a civil lawsuit against Jowers on behalf of Dexter King, the civil rights leader's son, and in 1998 won a jury's verdict that there was indeed a conspiracy involving Jowers, but not Ray.

Facts
Jowers originally told police he "saw nothing unusual" that night. Police locked everyone inside the bar for three hours. No one could come or go. None of Jowers' customers said they saw anything out of the ordinary.

None of the prosecution's evidence was presented in the civil trial. Jowers, who has since died, did not take the stand. The only time he testified under oath, in an earlier case, he denied the story about a second gunman with a second rifle.

In fact, at one point, in a phone call to Memphis investigators, Jowers was tape-recorded saying, "There was no second rifle."

Conspiracy theory: Military spies and a dramatic photo
Pepper, the lawyer in the conspiracy case, said military intelligence agents had gone onto the roof of the fire station opposite the motel with cameras to spy on King and they captured a photo of the real killer.

"One of the guys, when the shot took place, took his camera and spanned it all the way around to the left, into the bushes, and he caught the shooter lowering the rifle. And he said it was not James Earl Ray."

However, Pepper never saw such a photo. He said he was told about it, tried to obtain it and was rebuffed.

See photos from the motel scene and Ray's rooming house »

Facts
Agents from the 111th Military Intelligence Group had been sent into Memphis after a protest march ended in violence the week before. Two of those agents did go onto the firehouse roof. Fire Capt. Carthel Weeden took them there.

But he said the agents decided the roof was too exposed. "If you're up there," Weeden said, "anybody can see you from across the street. They walked around just a minute and came back down."

In fact, Weeden told CNN, it was probably two days before the murder when the agents were on the roof. They definitely were not there when King was shot, he said -- virtually eliminating any possibility such a photo could exist.

Conspiracy theory: The CIA connection
In the famous photo taken on the motel balcony with King's aides pointing in the direction from which the shot came, one man is not pointing, but instead is kneeling over King's body.

Unknown to the civil rights staff at the time, he was an undercover cop, assigned to infiltrate a black power youth group. His police supervisor said, "He had Dr. King's head in his lap. That's him holding him."

The FBI hid the fact the man was an undercover cop in the initial stages of its investigation. Later, the man would leave the Memphis police force and finish his career with the Central Intelligence Agency.

Facts
The young black policeman was Marrell McCollough. He testified openly in the House Assassinations Committee hearings in 1978 and said he had run up on the balcony to attempt first aid.

The CIA said McCollough did not join the agency until 1974, six years after the assassination. His was a nonoperational job. He is retired.

A Justice Department report in 2000 said McCollough had passed a lie detector test clearing him of involvement in King's death.

Conspiracy theory: The mysterious "Raoul"
Ray insisted from the time he was caught that a mystery man named "Raoul" whom he met in a Montreal bar in the summer of '67 duped him and framed him.

Attorney Pepper said years later he located a "Raoul" whose photo Ray and others would identify -- a retired autoworker in a New York City suburb.

Facts
In all the places Ray traveled leading up to the murder -- Los Angeles, California; New Orleans, Louisiana; Birmingham, Alabama; Atlanta, Georgia; and Memphis -- not a single witness has been found to place Ray with a mystery man.

The Justice Department cleared the autoworker in New York and said his daily employment records showed he could not have been with Ray in Memphis, Birmingham or other key places. Even Pepper conceded to CNN, "We never found anybody who placed James in Raoul's presence or Raoul in James' presence. We were never able to do that."

Most investigators have long considered "Raoul" to be a phantom of Ray's creation.