(CNN) -- FBI wiretaps have "given us the most powerful and persuasive source of all for seeing how utterly selfless Martin Luther King was," as a civil rights leader, according to a leading civil rights scholar. 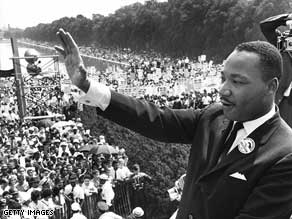 The FBI's interest in the Rev. Martin Luther King Jr. intensified after the March on Washington in 1963.

"You see him being intensely self-critical. King really and truly believed that he was there to be of service to others. This was not a man with any egomaniacal joy of being a famous person, or being a leader," said Pulitzer Prize-winning scholar David Garrow in a recent interview with CNN.

Hoping to prove the Rev. Martin Luther King Jr. was under the influence of Communists, the FBI kept the civil rights leader under constant surveillance.

The agency's hidden tape recorders turned up almost nothing about communism.

But they did reveal embarrassing details about King's sex life -- details the FBI was able to use against him.

The almost fanatical zeal with which the FBI pursued King is disclosed in tens of thousands of FBI memos from the 1960s.

The FBI paper trail spells out in detail the government agency's concerted efforts to derail King's efforts on behalf of the civil rights movement.

The FBI's interest in King intensified after the March on Washington in August 1963, when King delivered his "I have a dream speech," which many historians consider the most important speech of the 20th century. After the speech, an FBI memo called King the "most dangerous and effective Negro leader in the country."

The bureau convened a meeting of department heads to "explore how best to carry on our investigation [of King] to produce the desired results without embarrassment to the Bureau," which included "a complete analysis of the avenues of approach aimed at neutralizing King as an effective Negro leader."

The FBI began secretly tracking King's flights and watching his associates. In July 1963, a month before the March on Washington, FBI Director J. Edgar Hoover filed a request with Attorney General Robert Kennedy to tap King's and his associates' phones and to bug their homes and offices.

In September, Kennedy consented to the technical surveillance. Kennedy gave the FBI permission to break into King's office and home to install the bugs, as long as agents recognized the "delicacy of this particular matter" and didn't get caught installing them. Kennedy added a proviso -- he wanted to be personally informed of any pertinent information.

While King did have associates who had been members of the Communist Party, by all accounts they severed those ties when they started working in the civil rights movement. What's more, the FBI bugs never picked up evidence that King himself was a Communist, or was interested in toeing the party line.

But the long list of bugs in his hotel rooms picked up just enough about King's love life.

A decision in a 1977 court case brought by Bernard Lee, one of King's associates, sealed the transcripts from those wiretaps until 2027. But King's associates confirm there were at least two cases in which FBI surveillance caught King in compromising circumstances.

The first incident involved King at a party at the Willard Hotel in Washington. The FBI recorded the party and captured the sounds of a sexual encounter in the room afterwards. The second incident occurred during King's stay in a hotel in Los Angeles, California. There, agents heard another drunken gathering in which King told an off-color joke about the recently assassinated President John F. Kennedy. Hoover sent transcripts and excerpts of those recordings to the White House and to the attorney general.

Hoover's contempt for King's private behavior is clear in the memos he kept in his personal files. His scrawl across the bottom of positive news stories about King's success dripped with loathing.

When King learned he would be the recipient of the Nobel Peace Prize in 1964, the FBI decided to take its harassment of King one step further, sending him an insulting and threatening note anonymously. A draft was found in the FBI files years later. In it the FBI wrote, "You are a colossal fraud and an evil, vicious one at that." The letter went on to say, "The American public ... will know you for what you are -- an evil, abnormal beast," and "Satan could not do more."

The letter's threat was ominous, if not specific: "King you are done." Some have theorized the intent of the letter was to drive King to commit suicide in order to avoid personal embarrassment. "King, there is only one thing left for you to do," the letter concluded. "You know what it is ... You better take it before your filthy, abnormal fraudulent self is bared to the nation."

With the exception of the wiretap transcripts that remain sealed under court order, many of the other memos were made public as part of high-profile congressional investigations into the FBI's harassment of King. A summary was put together during the course of these investigations. Other memos were released through a Freedom of Information Act request from the Center for National Security Studies in 1978. Another large batch was released through a 1979 FOIA request from David Garrow.

While the memos depict a cold and calculating attempt by the government to personally embarrass King, the memos also create an ironic byproduct, according to Garrow.

"When you have a wiretap on someone you pick up all sorts of dreck. But in terms of the political history that ironically the FBI has created for us, it's a wonderful resource," Garrow said.