COLLEGE PARK, Maryland (CNN) -- At 94, Barbara Podoski finally gets to tell the story of how she punched a German sergeant in the face during World War II, when she was a secret U.S. interrogator. 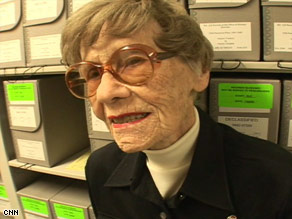 Her story was one of many brought to light Thursday, when the National Archives released declassified personnel records from the old Office of Strategic Services, the CIA's predecessor.

The names include Julia Child, who would later become a famous chef. Child was stationed in Sri Lanka and China as a researcher for the head of the OSS, Gen. William Donovan.

Two other OSS operatives, William Casey and William Colby, later led the CIA, the intelligence agency that replaced the OSS.

See which famous figures worked for the OSS »

Podoski was on hand for the release Thursday in a climate-controlled, high security room at the National Archives where thousands of documents are stored in an area normally off-limits to the public

She said she and thousands of other OSS agents were told not to talk much about their work. Their employment files had remained sealed.

"They used me mostly to interrogate prisoners of war," said Podoski, a native of what then was called Czechoslovakia. "I was multilingual."

Podoski said she became a U.S. citizen and joined the Army as WWII began. She recalled preparing to question the sergeant, a Nazi prisoner of war.

"He was very vociferous against America and was vilifying President Wilson," Podoski said. "I told him to stop, and he didn't, so I took my little fist and hit him over the face. I gave him a knuckle sandwich.

"I was very ashamed of myself because I had a pistol under my jacket, and he was unarmed," she added.

The German she questioned told her that Adolf Hitler was using Czechs and Slovaks to do "dirty work" along the Italian Front.

To counter that, she borrowed a Czech typewriter from the Vatican, and distributed an underground leaflet encouraging them to abandon the Germans.

"Within a week, about 600 guys, with my appeal, crossed the lines," she said, smiling.

She was honored for her intelligence-gathering efforts with a Bronze Star that she wore with other military awards Thursday, after years of secrecy.