(CNN) -- For some Americans, the recent fighting between Georgia and Russia has recalled days of the Iron Curtain, bomb shelters and hiding under desks. Those Cold War memories are especially intense for some iReporters, U.S. veterans who served under the constant threat of nuclear war. 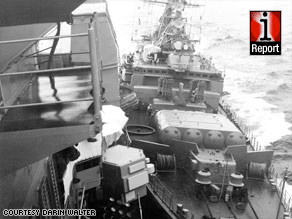 In a Cold War incident, a Soviet ship, right, rams the USS Yorktown in the Black Sea.

iReporter Timothy Lee served in the Navy on that icon of the Cold War era, the submarine.

"Submarines were the first line of defense," he writes. "There were many tense expeditions when we were in close proximity to Soviet submarines and ships."

Lee says the sense of threat from the Soviet Union he felt as a teenager intensified after he joined the Navy in 1985, at age 18.

"Being on a sub, it was constantly impressed upon us who the enemy was. There would be little posters reminding us to be quiet. If you accidentally closed a hatch or door too hard, that sound could actually emit out into the water and give your position away," he said by phone. iReport.com: Life on a sub during the Cold War

"For about two weeks, we were in the North Atlantic in a covert area, and it was necessary to remain at periscope depth, which is 50 feet underwater," he said. "It was hard to stay at that depth without breaking the surface and giving away our position. It was extremely tense for those two weeks. We'd spend six hour watches in the control room, just leaning over the steering mechanism with our eyes glued to the gauges as the sub bobbed up and down in the water. Another time we were discovered by the Soviets and had to make a quick getaway."

Mark Watts also served in the Navy during the Cold War, as a gunner's mate on the USS Yorktown CG-48. He was onboard in 1988 when a Russian ship rammed the vessel twice, trying to throw it off-course.

"It was as close to the real thing as we could get," he says of the incident. "We had the missile launchers ready, and we were all manned up. We could go to war at a second's notice, not a minute's notice."

The Yorktown was cruising through Soviet waters, exercising a rule called "right of innocent passage," which allows ships in international waters to peacefully pass through territorial waters if necessary for navigation.

"While we were doing it, we were using our radar to look into Russia, but of course we didn't tell them that," Watts said.

He was below deck cleaning a missile launcher when a Russian ship hit the Yorktown twice, apparently trying to knock it off-course. iReport.com: Watch a video of the ships colliding

"The second hit was almost exactly where I was," Watts said. "I said, 'we're not going out on deck. We don't know if they're shooting or what.' We checked every missile, and it was the only time that I've ever seen the ready to load light steady on the monitor. We sat there for a long time, and eventually the captain came on and said what happened and to stand down."

Once the situation was safe, Watts says, he was able to go on deck and shoot pictures of the damage as the ship's speakers blared Bruce Springsteen's "Born in the USA."

Two other iReporters served on the Army's front lines of the Cold War: Berlin, Germany.

Steve Jackson and Darryl Dunlap served in the Berlin Brigade, the U.S. Army unit that occupied West Berlin during the Cold War, along with troops from Britain and France. Dunlap, who served from 1987 to 1991, called the experience "almost surreal."

"You lived under an air of suspicion and intrigue at the same time," he said. "Being young soldiers, you also had an air of cockiness about you, and you felt invincible."

Dunlap was once detained by East German guards while crossing the border from East to West Berlin at Checkpoint Charlie. After more than hour of being questioned and taunted by guards -- during which Dunlap only repeated his name and rank and demanded to be allowed to pass through the gate, as he had been trained to do -- a colonel from the U.S. military saw what was happening and was able to have him released.

"I had visions of ending up in Siberia," Dunlap said, "but later I found out that this happened on a regular basis. iReport.com: The last outpost of freedom

"It was just something you lived with," he added. "You lived your normal life and did your job, but you always looked over your shoulder, wondering if you were being followed, and you had to be careful what you said. Now as someone that's more stable in life, I wonder how we lived through that. But back then, we loved what we were doing. Every soldier there was ready to do everything he could to preserve freedom."

Jackson, who served in the Berlin Brigade from 1979 to 1982, says that seeing news of the Georgia-Russia conflict brings back bad memories for him -- and also, probably, for those who lived in the former Soviet Union.

"For the older Georgians who remember the Soviet domination, I think they're scared to death that it's all going to come back," he said. "Everything from communism to the social injustice and tyranny that marked that era. It upsets me also, because I've seen what it's like for three years behind the wall, and if you haven't lived it, you don't know what it is." iReport.com: A strange three years in the Berlin Brigade

Dunlap echoes Jackson's thoughts: "Regardless of who started the conflict between Russia and Georgia, Russia is taking their time to leave," he said. "If you've ever seen the dark shadow of old-world communism before the wall fell, it's scary. We had a saying: When you went into East Berlin, you set your watch back 20 years. They were that oppressed. And a lot of them didn't even realize it."

Tom Wharton, who served in the Air Force during the Cold War, summed up the thoughts of many of our iReporters when he said that, although he's not glad the Cold War had to happen, he is glad he had the experience.

"We had the opportunity to see how the other side lived, and I actually enjoyed the experience. I think it gives you a different outlook on life. You don't take everything for granted, and sometimes there's a price to be paid for things. It's a shame that we have to have it, but when somebody threatens your lifestyle, there's an opportunity to protect it." iReport.com: Cold War adventures in the Air Force