Their house survived Ike, but it's the only one left

(CNN) -- Warren and Pam Adams lost a house to Hurricane Rita in 2005, so you might think they'd be relieved their new home withstood Hurricane Ike last week. 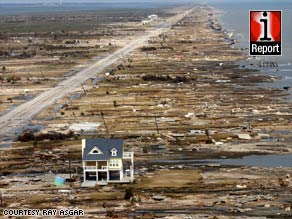 Helicopter pilot Ray Asgar submitted this aerial shot of the house on Wednesday.

But not when their house is the only one still standing in their section of Gilchrist, Texas.

Ike's storm surge last week devastated the Bolivar Peninsula town, flattening most of the roughly 200 homes there. The couple's yellow house at the beach -- supported 14 feet off the ground by wooden columns -- was the only house on Gilchrist's Gulf Coast side not to be leveled.

"As we got there, the tears started flowing," Warren Adams, 63, said Thursday after his first visit to the home since evacuating. "There's a yellow house sitting there, but that's all. It was devastating."

Although the house is there, it might not continue to stand. Huge storm surges walloped the interior, making it uninhabitable and destroying many belongings.

Appliances, furniture, and a grandfather clock were some of the many things rendered useless. Warren and Pam, two of the beach town's several hundred permanent residents before Ike, spent part of Thursday salvaging what they could and lamenting the destruction of their friends' homes.

Watch homeowner say house may not be salvageable »

"It looked like somebody had dropped a bomb," Warren Adams said. "If my house wasn't there, I wouldn't have been able to recognize where I was even at."

The Adams home hadn't been the only one on stilts. In fact, columns elevated many of Gilchrist's houses, but some houses were only a few feet off the ground, Warren Adams said.

The survival of the couple's house, where they started living in April of last year, caused a stir on the Internet. Helicopter pilot Ray Asgar shot some photos of the house from the air and submitted them to CNN's iReport.com. Some who wrote comments about the photos questioned whether they were authentic. iReport.com: See photos, comments

Aaron Reed, a spokesman with the Texas Parks and Wildlife Department, confirmed that only the Adams' home survived on that Gulf-side beach.

"I thought, if I were to ever build a house on the coast, I'm going to contact the guy who built this," Reed said.

He also said a few other houses on the other side of town were still standing.

Adams said many of Gilchrist's homes were built before current building codes, and weren't elevated or not elevated nearly as high as his.

The couple owned one of those older houses -- on the same lot where their new home now stands. Hurricane Rita destroyed the older one three years ago.

Determined to stay because they loved the beach, the couple decided to build something that stood a much better chance of withstanding a strong hurricane.

Adams, a retired electrical designer, had a Galveston, Texas, engineering firm oversee a contractor as his new house was built.

The columns put the house's bottom floor 14 feet above ground, or about 22 feet above sea level. Despite that, Ike's storm surge managed to get in.

"Can we always beat Mother Nature? No," Adams said. "Mother Nature can be much stronger."

Adams said he and his wife almost waited too long to leave the house last week. They boarded the windows and went to bed on the night of September 11 thinking they'd rise at 5:30 a.m. to evacuate.

But he said that shortly after midnight -- more than 24 hours before Ike's center would make landfall -- the effects of the storm were hitting. He awoke to see Pam, 53, out on the deck, crying.

Watch sister talk about what Pam, Warren Adams have been through »

Hudspeth, who spoke with Pam, said the couple encountered a sheriff's officer as they left the peninsula.

"[Pam] said, 'I almost waited too long,' and the officer told them, 'Yes, ma'am, you did. You're really lucky, and you need to get out,'" Hudspeth, who lives in Richmond, Texas, recalled.

The couple and their two dogs are staying with friends and relatives, and they could get a rental house, Warren Adams said. But ultimately they'd like to return to Gilchrist if the county will allow people to rebuild there.

"I know there's a chance you'll face hurricanes, but that's the chance you take," Adams said.

Adams, who has battled cancer, said he hopes he doesn't have to wait long for the government's decision.

"If we can rebuild, a lot of people will rebuild," he said. "If we can't, tell us that we can't. The sooner we can get this behind us, the better."

CNN's Katie Hawkins and Abbi Tatton contributed to this report.

All About Hurricane Ike • Accidents and Disasters