HONOLULU, Hawaii (CNN) -- Bobby Maxwell kept a close eye on the oil industry for more than 20 years as a government auditor. But he said the federal agency he worked for is now a "cult of corruption" -- a claim backed up by a recent government report. 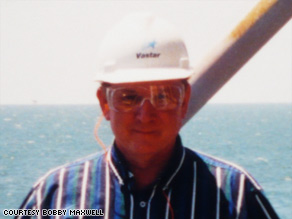 Bobby Maxwell, a long-time auditor of the oil industry, says his former agency is corrupt "top to bottom."

"I believe the management we were under was showing favoritism to the oil industry," Maxwell told CNN.

Maxwell is referring to a tiny agency within the Department of the Interior called the Minerals Management Service, which manages the nation's natural gas, oil and other mineral resources on federal lands.

A report, conducted by the Interior Department's inspector general and released earlier this month, found that employees at the agency received improper gifts from energy industry officials and engaged with them in illegal drug use and inappropriate sexual relations. It looked at activities at the agency from 2003 through 2006.

Maxwell said the report doesn't surprise him. The agency, he said, is corrupt "top to bottom."

"It sounds like they forgot they work for the government," he said. "It's disgusting. ... There's no excuse for that. Those people should not be working in those positions at all.

"They crossed a lot of lines that should never have been crossed," he said. "They lost all objectivity."

Maxwell was in charge of keeping track of the millions in royalty payments owed taxpayers by oil and gas companies who explored and found oil on U.S. government lands.

He estimates he and his team were responsible for saving the government close to $500 million in royalties, either underpaid or somehow skipped by oil and gas companies, over the years.

He received the Interior Department's highest award in 2003 for his work. But not long afterward, his job was killed.

He believes it was retribution for his cracking down on Big Oil and blowing the whistle on what he believes was a "cult of corruption" within the agency. The Interior Department denies that, saying his job was reorganized as part of routine restructuring.

Just before he lost his job, he said, one of his superiors in Washington ordered him not to investigate why Shell Oil had raised its oil transportation costs. Maxwell said it jumped from 90 cents to $3 a barrel without adequate explanation. The government paid Shell to transport oil from offshore platforms.

When asked why a government worker would tell an auditor not to investigate, he said: "I believe it started from the top down," he said.

Shell Oil told CNN it "pays the same rate any shipper does" and that it has "never engaged in fraudulent transactions or entered into sham contracts as Mr. Maxwell alleges."

Maxwell, a registered independent, said the shift in attitude at the agency began about seven or eight years ago, about the time the Bush administration came into power. He said he was discouraged from aggressively auditing oil companies.

"Laws and regulations were not applied, also not enforced," he said.

The inspector general's 27-page summary says that nearly a third of the roughly 60 people in Maxwell's former office received gifts and gratuities from oil industry executives.

Two received improper, if not illegal, gifts at least 135 times, the report says. It goes on to describe a wild atmosphere in which some staff members admitted using cocaine and marijuana.

In addition, two female workers at the Minerals Management Service were known as the "MMS chicks" and both told investigators they had sex with oil industry officials they were supposed to be auditing.

One e-mail from a pipeline company representative invited government workers to a tailgating party: "Have you and the girls meet at my place at 6 a.m. for bubble baths and final prep ... Just kidding."

Inspector General Earl Devaney said in a letter to Interior Secretary Dirk Kempthorne accompanying the report that it details "a textbook example of improperly receiving gifts from prohibited sources."

Maxwell is now retired from the government and teaches at the University of Hawaii. He said it was just a matter of time until the agency's behavior was exposed. He feels vindicated now in the wake of the inspector general's report, but is still disgusted by what he was happening at the Minerals Management Service.

"Their job is to protect United States taxpayers' interest. It's like they completely forgot that, like they just became part of the oil companies," he said.

Kempthorne said he was "outraged" by the disclosures in the inspector general's report and that the actions "of a few has cast a shadow on the entire agency."

But the department said there is no evidence taxpayers lost money as a result of unethical behavior between government workers and the oil and gas industry.

The former auditor said he'd love to put all the government royalty records under his magnifying glass.

Maxwell has filed a whistleblower lawsuit against the Kerr-McGee Corp., an energy company involved in oil and gas exploration. In it, he claims the company defrauded taxpayers out of millions in oil royalty payments.

The company denies the accusation. If Maxwell wins, the government would receive about $40 million in additonal revenue and Maxwell would be entitled to about a third of that.

All About U.S. Department of the Interior • Oil Production and Refining • Energy Policy