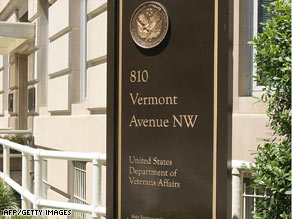 The plaintiffs say the U.S. Department of Veterans Affairs takes an average of six months to rule on a typical claim.

The lawsuit, filed by the Vietnam Veterans of America and Veterans of Modern Warfare in U.S. District Court in Washington, seeks to force the Department of Veterans Affairs to provide an initial ruling on every veteran's claim for disability benefits within 90 days and to resolve appeals within 180 days.

The veterans' groups also are seeking interim benefits for veterans whose claim rulings take longer than those time periods.

"The failure to expedite veterans' compensation claims creates, at best, the impression that the nation does not respect its veterans," John Rowan, president of the Vietnam Veterans of America, said in a written statement. "America's veterans deserve more, and the VA's failure to fulfill its responsibilities brings dishonor to our nation and can only make the call of military service more challenging."

According to the veterans' groups, an initial decision on a typical benefits claim takes an average of six months. Appeals of initial rulings take, on average, over four years, according to the groups.

"We have not yet seen this lawsuit, and the Department of Justice handles litigation issues in the U.S. District Court for the VA, so we can't really comment," said Lisette Mondello, assistant secretary for public and intergovernmental affairs for the department.

"Regarding the press accounts today, we would note that the VA has made considerable improvements in claims adjudication and continues to do so. It is a key priority for the VA."

In June, President Bush signed a $162 billion war funding bill that contained a new "G.I. Bill" expanding education benefits for veterans who have served since the September 11 attacks.

All About U.S. Department of Veterans Affairs