Inside the Jonestown massacre

(CNN) -- Thirty years ago, 909 Americans were led to their death by the Rev. Jim Jones in a mass murder-suicide pact in a South American jungle, shortly after Jones' gunmen killed a visiting U.S. congressman and four others at a nearby airstrip. 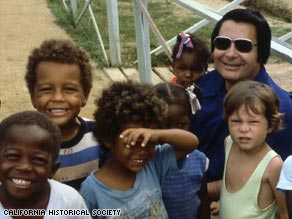 One-third of the victims were children. Many were killed by Jones' aides, who squirted cyanide down their throats.

Of the nearly 1,000 church members who began the day in Jonestown, a cult commune, only 33 survived to see the next day.

The following is a thumbnail history of the Jonestown tragedy on Nov. 18, 1978:

What happened? More than 900 Americans died in a South American jungle upon the orders of Rev. Jim Jones, who had tried to create a socialist paradise that survivors called a slave camp.

What led up to this? When California Rep. Leo Ryan arrived on a one-man investigative mission, bringing along a TV camera crew and various reporters, 15 church members asked to leave with him. Jones sent gunmen to a nearby airstrip, where they killed Ryan, an NBC correspondent and his cameraman, a newspaper photographer and one of the departing family members.

Who was Jim Jones? He was a self-appointed minister from a small town in the Midwest, who first led his flock to California, where he hoped to avoid fallout from a possible nuclear war. He then moved his people to Guyana when he came under criticism for church beatings and financial abuses.

Thirty years ago, more than 900 people died by murder and suicide. Only 33 survived. Soledad O'Brien reports on their untold stories.
Thursday, 9 p.m. ET

Where did the money come from? Jones was a phony faith healer, and much of his money came in mail-order donations from the desperate. Elderly members handed over their Social Security checks, working adults gave 25 percent of their wages to the church and some signed over all their property. Government investigators would later find at least $10 million in Swiss banks, mainly in Panama. Another $1 million in cash was recovered in Jonestown.

Did anyone survive? Thirty-three people who began that day in Jonestown escaped with their lives. There were two main groups of survivors. Eleven people, four of them small children, walked almost 30 miles through the jungle to another town. Fourteen departing church members lived through the airport ambush -- five of them youngsters who were lost for three days when they ran into the jungle to hide. See list of survivors

What happened to the killers? All but one of the airport gunmen died in the mass suicide. Larry Layton, who posed as a defector, was captured after badly wounding two people inside a plane trying to take off. He was not paroled from an American prison until 2002.

How did Jones die? He did not drink the cyanide. He was shot in the head, probably by a trusted aide, at the very end. His body was among the first to be identified -- through fingerprints that had been taken after a vice squad arrest five years earlier in the men's room of a Los Angeles movie theater.

What is left of Jonestown today? Nothing. The settlement has disappeared, the buildings dismantled and carried away by native Indians. Jungle weeds and trees have overgrown the area again. The only notable relic left to be found are the remains of one small rusting garden tractor. What persists is simply silence.

All About Jonestown • Jim Jones