Jim Jones' followers enthralled by his skills as a speaker

(CNN) -- The key to understanding the tragedy that was Jonestown lies in the oratory skills of the Peoples Temple founder, Jim Jones. 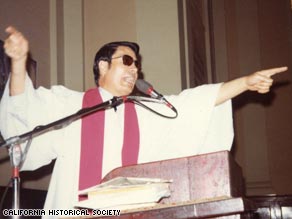 "He was very charismatic," Leslie Wagner-Wilson, a Jonestown survivor, says of the Rev. Jim Jones.

With the cadence and fervor of a Baptist preacher, the charm and folksiness of a country storyteller and the zeal and fury of a maniacal dictator, Jones exhorted his followers to a fever pitch, audiotapes recovered from Jonestown reveal.

As he spoke, they applauded, shouted, cheered. One follower who survived the "revolutionary suicide" at Jonestown on November 18, 1978, said that Jones was the most dynamic speaker he had ever heard.

Like all powerful speakers, Jones' greatest asset was his ability to determine what listeners wanted to hear and give it to them in simple language that appealed to them on an almost instinctual level.

"He could quote scripture and turn around and preach socialism," she said. "He appealed to anyone on any level at any time."

Hear Jones declare "I am God" »

Many of his followers were elderly African-Americans drawn to his cause by his soulful delivery and Pentecostal preaching style, including at times speaking in tongues. That hair-raising fervor was perhaps only overshadowed by what he said.

Thirty years ago, more than 900 died by murder and suicide. Only 33 survived. Soledad O'Brien reports on their untold stories.
Thursday, 9 p.m. ET

"When I say, I am God, then I feel [faith] well up within my soul. And I see it well up in you, and I see the sick healed, and the blind see, and the dead raised. ... You wanna know how I feel, I never feel so good as when I say I am God," he shouted in a full-throated roar in a 1972 sermon.

Jones further enraptured crowds with faith healings -- laying hands on disabled or sick people who would miraculously be cured of any ailments. Though insiders later revealed that these healings were staged, Jones' mastery of word and presentation left few in attendance with any doubts about his abilities.

He also indoctrinated many young, idealistic liberal white people in progressive 1970s California with the themes of socialism, equality and political activism. And he justified his brand of socialism with the Bible for those recruited from more conservative religious factions, who might have found such left-wing ideas tough to swallow.

"The only ethic by which we can lift mankind today is some form of socialism," he said in another 1972 sermon. "There's a smattering of it in the, in the New Testament. It's very evidently clear on the day of Pentecost that they that believed were together and had all things common."

Socialism, he said, is "older than the Bible by far."

But by the time Jones and many of his followers completed a lengthy relocation from California to Jonestown in Guyana in 1977, he had begun to change as a speaker. His trademark passionate delivery gave way to blind fury and incredible rage.

Listen to the rage of Jim Jones »

"I been tired for 25 years," the 47-year-old Jones preached in 1978, his voice rising steadily in pitched anger. "I'm tired of looking at people's faces that don't give a f--- for 25 years, I watch and they don't give a g------. You can lay it out in front of them, and they will not listen. They will not read. They will not do anything, and that's why I have to suffer every day and all night and all through the hours, because I will have nobody but a few that will carry the burden with me. Because you hide yourself away in ignorance."

His rages created a fear that cemented the hold he had on his followers.

He also used a "divide and conquer" method among his followers.

"What Jones did was try to break all ties that were not to him," said former believer Vernon Gosney. "Transfer all that loyalty, all that bonding to him. And so families were broken apart. Relationships were divided."

Such divisions caused family members to spy and report on one another, or friends to turn in friends for various transgressions.

Jones furthered the poisonous atmosphere among his followers by encouraging physical fighting to either solve problems or administer punishment. Audiotapes of such sessions reveal Jones laughing, apparently entertained.

Jones' mastery of the spoken word also enabled his many sexual exploits with both female and male followers. Jones deftly justified his actions to his followers by saying that what he did to them was actually for their own benefit, or the benefit of making the church a stronger, tighter-knit organization.

He preached that many of his male followers were in denial about their homosexuality, conditioning those followers to accept him if he approached with a sexual advance.

And he defused any accusations of sexual perversion on his part by claiming that he gained no personal pleasure from his acts, which he called a "great sacrifice."

By the end at Jonestown, Jones was more rock star than preacher. His sermons and remarks at meetings were littered with obscenities. He regularly had sex with his followers and he abused drugs. By the last month of Jonestown's existence, Jones was so intoxicated at times that he had great difficulty even reading the news aloud to his followers.

As the end drew near, Jones' tone as a speaker took darker turns. He constantly fed his followers in Guyana a steady diet of fatalism.

"I said, life is a f------ disease," he said. "It's worse than cancer. It's a disease. And there's only one cure for the sonofabitchin' disease. That's death. And socialists can only take one form of death. What is it? Fight a goddamn war, or revolutionary suicide. If you don't believe life's a disease, then you're dumb. Very dumb."

Spurred on by their leader's talk, Peoples Temple members were ready to follow Jones even into death. At his request, they even wrote personal notes to him expressing their willingness to die for their cause.

Some followers willing to die »

This was the ultimate test of loyalty, and the absolute testimony to the power of his words. As history shows, Jim Jones the orator was chillingly effective.

Listen to final 45 minutes at Jonestown »

All About Jonestown • Jim Jones