(CNN) -- Was it a theft? A prank? A roundabout effort to bring some holiday cheer to the police? Authorities in Harwich, Massachusetts, are probing the mysterious appearance of a piano, in good working condition, in the middle of the woods. 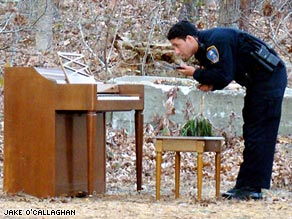 Officer Derek Dutra of the Harwich Police Department examines the mystery piano in the Massachusetts woods.

Discovered by a woman who was walking a trail, the Baldwin Acrosonic piano, model number 987, is intact -- and, apparently, in tune.

Sgt. Adam Hutton of the Harwich Police Department said information has been broadcast to all the other police departments in the Cape Cod area in hopes of drumming up a clue, however minor it may be.

But so far, the investigation is flat.

Also of note: Near the mystery piano -- serial number 733746 -- was a bench, positioned as though someone was about to play.

The piano was at the end of a dirt road, near a walking path to a footbridge in the middle of conservation land near the Cape.

It took a handful of police to move the piano into a vehicle to transport it to storage, so it would appear that putting it into the woods took more than one person.

Asked whether Harwich police will be holding a holiday party in the storage bay -- tickling the ivories, pouring eggnog -- while they await word of the piano's origin and fate, Hutton laughed. No such plans.

Harwich police have had some fun, though. Among the photos they sent to the news media is one of Officer Derek Dutra examining the piano in the woods. The police entitled the photo "Liberace."