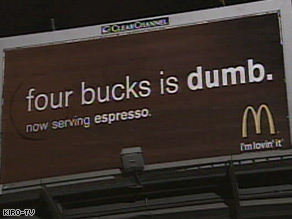 Residents in Seattle, Washington, the birthplace of Starbucks, can now see approximately 140 McDonald's billboards emblazoned with "large is the new grande" or "four bucks is dumb."

In a statement released Thursday, McDonald's called it "a light-hearted, fun approach to our brand," aimed at promoting the company's McCafe coffee products. However, Starbucks is not finding the ad campaign funny.

"Comparative campaigns are all well and good but only when they're credible and authentic. If the claim is not supportable or the tone is off, you risk losing credibility," Deb Trevino, director of global communications for Starbucks, told CNN.

A 12-ounce cup of coffee at Starbucks in Seattle costs just $1.40, only a penny more than the average price for a same size cup at McDonald's.

Credibility is something that Starbucks claims it is not short on. A portion of coffee sales currently goes towards health care for Starbucks' baristas, while another goes towards helping AIDS victims in Africa, according to the company.

"We will not enter into a tit-for-tat," Trevino said. "Our customers are interested in more than just the coffee, they come for the experience."

For now, McDonald's said it does not plan to take its "four bucks is dumb" campaign nationwide.