DENVER, Colorado (CNN) -- A problem with the landing gear, tire or brakes may have caused a Continental Airlines jet to veer off a runway into a 40-foot-deep ravine during its takeoff at Denver International Airport, a source told CNN Monday. 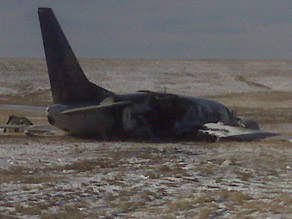 A source tells CNN that it is possible a wheel locked up while the Continental jet took off from Denver.

More than three dozen people were injured in Saturday's accident, most from bruises and broken bones as frightened passengers tried to flee a fire on board. There were no fatalities.

The source said early indications show a problem with the landing gear, tires or brakes could have caused a wheel to lock up.

The National Transportation Safety Board did an "initial readout" of the cockpit voice recorder and flight data recorder recovered from the wreckage Sunday, a government aviation official said.

Robert Sumwalt, a National Transportation Safety Board member leading the investigation team, said Monday at a news conference that both recorders contained "good data" and that the voice recorder was audible.

"Tonight, we should have some overall characterization of what was said in that cockpit," he told reporters.

He would not confirm that a problem with the landing gear, tire or brakes may have caused the accident, saying the investigation was still in its early stages.

Sumwalt also said he could not identify the captain and first officer, nor say whether either was hospitalized or who was actually flying the plane. Neither has been interviewed yet, though federal investigators are arranging for an interview with the first officer. A knowledgeable source told CNN the captain was hospitalized in serious condition.

On Monday investigators were to begin interviewing crew members, pilots and passengers to help determine what caused the accident. From the air, a crack is visible wrapping around the middle part of the plane.

"The captain has not been interviewed at this time," Sumwalt said. "We want to do it as soon as we can but want to be respectful of the captain's mental condition. ... We want to make sure he or she is mentally ready."

When pressed about when that interview would take place, he said, "Everybody wants to get the NTSB interview over with as soon as possible. ... The pilots want to get it over with because it's something you get nervous about."

Preliminary findings may come within a week, Sumwalt said, but a full investigation could take a year.

Gabriel Trejos was about to board Continental Flight 1404, bound for Houston, with his wife and 1-year-old when gate officials announced the plane was experiencing "engine problems," Trejos told CNN affiliate KUSA.

But, "shortly after that, they said everything is fine. There's going to be an on-time flight," Trejos said.

Continental spokeswoman Julie King, however, said she was unaware of any announcement of engine problems on the flight.

The Boeing 737 taxied down the runway at Denver International Airport and accelerated.

It was dark, 6:18 p.m., and the Trejos' baby, leaning against the window, giggled at the lights on the tarmac.

"All of a sudden, it was too much light," said Maria Trejos, who is four months pregnant.

"We felt the plane veer to the left. My husband was holding my son and we felt some bumpiness and I thought it was just turbulence," she said. "I looked to the side and all of a sudden there was this giant fireball behind my husband's head. I have this image of him just grabbing my son's head and just pulling him toward himself and all of a sudden we felt this heat."

She felt a bump, she said. "And it felt like we were airborne for a couple of seconds."

The plane skidded off the runway, its wheels disintegrating. It slammed into a ravine, its fuel tanks leaking, and caught fire. Luggage fell out of overhead bins that had begun to melt.

Passengers panicked and shoved and stepped over each other. One yelled, "The plane is going to explode!" said Gabriel Trejos, who was clutching his child and feared that the buckling seats would "squash" them both.

The couple fought their way into a line of people scrambling to get out of the back of the plane. Some were trying to get their luggage first.

"I just wanted to get out of there," Gabriel Trejos said.

He noticed that the escape chute in the middle of the plane had fewer people huddled near it. The Trejos dashed for that and escaped.

All 115 people on board survived the crash. Forty people were injured, two critically, authorities said. Bone fractures and bruises were the most common complaint, and there appeared to be no burn victims, fire officials said.

In the airport after the ordeal, passengers used terms like "rag doll" to describe how they felt during the nightmare.

"It was incredibly violent," Jeb Tilly told CNN affiliate KPRC. "It was a big left-hand turn and we sort of started bouncing a lot as if we were in a roller coaster, you know, you're kind of getting tossed around in your seat.

"And then there was a lot of silence all of a sudden. We took a big drop and when we hit the ground, that's when the thing really got kind of screwy," Tilly continued. "I think that's when the plane cracked in half at that point and all the overhead baggage compartments broke open and fell down."

At a news conference late Saturday, Patrick Hynes, chief of the airport division of the Denver Fire Department, said crews responding to the scene "had a difficult time narrowing down exactly where the airplane ended up," but found it north of a firehouse.

When they arrived, firefighters found the plane on fire in a ravine about 200 yards from the runway, with its wheels sheared off and fuel tanks leaking, Hynes said.

"They [firefighters] described a surreal scene when they pulled up, heavy fire on the right side of the aircraft, all chutes deployed from both sides of the aircraft, people evacuating and walking up the hillside towards them," he said.

Hynes said the entire right side of the jet was in flames and "a heck of a firefight" followed.

"There was significant extension of fire into the cabin portion," he said. "There's significant fire damage inside with the luggage compartment described as melting and dropping down into the seats."

Hynes said fuel from the aircraft leaked for several hours after the accident.

CNN's Kathleen Koch and Susan Roesgen contributed to this report.

All About Accidents and Disasters • Air Travel • Denver