Wife: Nelson Mandela has one regret

(CNN) -- In a rare and candid interview, CNN's Robyn Curnow spoke to Nelson Mandela's wife of 10 years, Graca Machel, to find out more about the man from the person who arguably knows him the best. Here, Machel reveals that Mandela's courageous and eventful life has left him with only one regret. 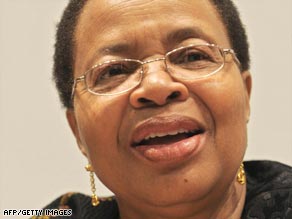 Machel: "We have enjoyed this relationship in a really special way."

How would you describe your relationship with Nelson Mandela?

He is simply a wonderful husband. We met in life at time we were both settled. We were grown up, we were settled, we knew the value of a companion, of a partner. Because of that, we have enjoyed this relationship in a really special way. It's not like when you are still young, you are too demanding. No, no. We just accept each other as we are. And we enjoy every single day as if it is the last day. Because of that, it has been wonderful to have him as a husband..

Do you look at him and go, "I married Nelson Mandela?"

At the beginning, yes. I already had this very deep involvement with him. Then sometimes. It's ... there was a sort of conflict between the man I loved and the myth. Particularly because people were saying things, and I couldn't figure out the two would go together. I know him as a human being, a person and this myth surrounding him. The aura around him was a bit confusing, but then I learnt to live with it, in terms of separating the two.

Is he comfortable in his own skin?

Absolutely. More than comfortable. He is so happy with himself. At the end of his life also he realizes, although he doesn't express it. He realized that he achieved the things he had as goals in life.

So is he at peace with himself?

Yeah, really. It's peace, fulfillment. Best way to characterize it is to be at peace with himself, but also at peace with the world

Does he have any regrets?

Ya, only one I know of. You feel he would have really liked much more input in the development of his children. Only thing. Although he tried his best.

Madiba (Mandela) was not given the opportunity to bring up his own children. He left them. Went to prison when they were very young. He didn't have much opportunity to do those things that a parent a father does to read stories to child.

How has he dealt with old age, for somebody who seems to be such a fighter, doer, has the frailty of old age frustrated him?

I think the only thing that frustrates him is walking. When he tries, he feels, he puts it as his knees don't cooperate ... that's how he puts it. He is not anxious about getting old. No, no, no. He feels he would like to move freely. That this the kind of frustration I sense in him.

I have already given him the best present I could and thought of, 10 years ago when we got married. I looked back sometimes ... It sounds crazy, someone of my age at the time. I was 52; I married a man of 80. It wasn't a problem. I was so happy to marry him. I think after that any other thing is much less, because it will never surpass the possibility of us being together, sharing a life. That is the best I could have given him.

Because it is your wedding anniversary?

When we married, we didn't know we'd be given 10 years together. We have been very lucky. Very grateful for that.