PARIS, France (CNN) -- France on Wednesday said accusations by Rwanda that French politicians and military officials helped prepare and carry out the 1994 Rwandan genocide are "unacceptable." 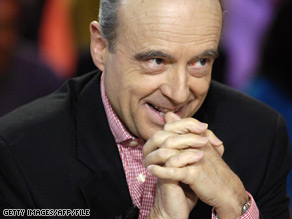 Rwanda's Ministry of Justice released a report Tuesday detailing the alleged French role in the mass killings, which left 800,000 people dead in 100 days when Hutu extremists went on a rampage killing Tutsis and moderate Hutus.

The report was compiled by an independent national commission in Rwanda. But France questioned the objectivity of the commission, which was formed to "shed light on the role of France in the genocide of Tutsis in 1994," according to the Rwandan government's Web site.

There is no surprise in the conclusions of the commission given its mission, the French Foreign Ministry said in a statement.

It also decried the contents of the report. "There are, in this report, unacceptable accusations leveled against French politicians and the French military," the Foreign Ministry said.

Alain Juppe, who served as the French foreign minister at the time of the Rwandan massacres and who is named in the Rwandan report, said the panel's findings are part of Rwanda's efforts to "re-write history."

"We are witnessing for several years now an insidious attempt to re-write history," the French newspaper Le Figaro quoted Juppe as writing on his blog in January.

"(This effort's) goal is to transform France into a party engaged in complicity in the genocide. This is an unacceptable falsification," Juppe said in his blog, according to the article published Wednesday. "During the time I was in charge of French diplomacy (April 1993 to May 1995), we made every effort possible to help in the reconciliation of Rwandans."

The French Government said it has cooperated with the International Criminal Tribunal for Rwanda and has arrested Rwandan suspects in French territories wanted in connection with the genocide.

In addition to Mitterrand, the report also names former Prime Minister Dominique de Villepin and Admiral Jacques Lanxade, who was army chief of staff from 1991 to 1995. It says they worked with the then-Rwandan government to carry out the genocide.

"French soldiers themselves directly were involved in assassinations of Tutsis and Hutus accused of hiding Tutsis," the report says. "French soldiers committed many rapes, specifically with Tutsi women."

In announcing the findings of the independent commission on Rwandan television Tuesday, Justice Minister Tharcisse Karugarama said the report could be the basis for future legal action against former French politicians and military officials.

In July, according to Le Figaro, Rwandan President Paul Kagame threatened to indict French officials in the matter unless European courts revoked arrest warrants issued against Rwandans named in the killings.

The killings began April 7, 1994, the day after a plane carrying the presidents of Rwanda and Burundi was shot out of the sky with a missile as it prepared to land in the Rwandan capital of Kigali.

French forces deployed to Rwanda in June 1994 for a humanitarian mission dubbed Operation Turquoise. France says the operation established safe humanitarian zones to shelter the population and that troops allowed thousands of others to escape the fighting.

The Rwandan report says it was during Operation Turquoise that the French soldiers took part in assassinations and rapes -- acts based solely, the report says, on account of the victims' ethnicity.

All About Rwanda • Genocide • France