UNITED NATIONS (CNN) -- Rebel forces have declared a cease-fire after four days of fighting in the North Kivu province of eastern Congo, the French ambassador to the United Nations said after Security Council talks on the unfolding humanitarian crisis. 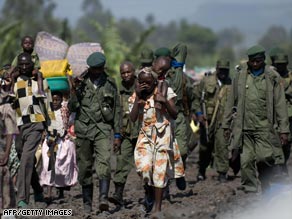 Laurent Nkunda, the Congolese Tutsi general who leads troops of the National Congress for the Defense of the People, ordered the cease-fire, Ambassador Jean-Maurice Ripert told reporters.

"We hope that it will stand, and we hope that tomorrow Mr. Nkunda will announce that he stops his offensive," Ripert said, adding that he expected the the council would condemn the military operation.

He called the humanitarian situation "very alarming," said more than 50,000 people "are on the road," and expressed hope that Secretary-General Ban Ki-moon would send a high-level envoy to the region for talks "as soon as possible."

Representatives of European countries "are talking together" about how best to ease the situation, Ripert said. "We are looking into the most effective and fastest way of helping MONUC," he said, using the French acronym for the U.N. mission in Congo.

Nkunda has accused the Congolese government of failing to protect the Tutsi tribe from Rwandan Hutu militia in Congo.

Ripert cited reports of fighting at the DRC's border with Rwanda and called on neighboring countries "to use restraint and not to interfere."

News of the cease-fire was embraced by Samuel Nagbe, a representative of the relief agency Oxfam, in the eastern Congolese city of Goma.

"We are very happy that, at least, the fighting is going to stop," he told CNN. He called for the factions to meet "to find a lasting situation to the crisis."

Nkuda's troops were advancing after fighting between the rebels and government forces led thousands of people to flee south toward Goma, capital of North Kivu province in eastern Congo. Conditions in the region were "continuing to deteriorate rapidly," the medical charity Doctors Without Borders said in a statement posted on its Web site.

Madnodje Mounoubai, spokesman for the U.N. peacekeeping mission in Congo, said government troops were leaving the city, which wasn't on the front lines. He said he didn't know where the soldiers were going, but suspected they were headed to areas of heavy fighting.

Ban said at midday he was "alarmed at the escalation of violence" over the prior 24 hours and warned of a "humanitarian crisis."

"We're working as best we can to minimize or defuse the situation, get more troops in there," McCormack said.

Attacks by CNDP rebels have uprooted hundreds of thousands of displaced people from camps run by the United Nations and other organizations.

"The humanitarian situation is quite dire," Mounoubai told CNN by phone from Kinshasa, Congo's capital.

"We have internally displaced people streaming out of camps. Both parties are blocking the U.N. from reaching desperately needy people to evacuate," he added. "I cannot emphasize how desperate the situation on the ground is."

The region's instability endangers aid workers, some of whom have joined the exodus. Michael Arunga, a spokesman for World Vision, told CNN the organization's workers had fled to the Rwandan border, where they were assessing the situation and caring for civilians crossing into the area. Arunga said he himself had fled from Goma, where he could hear shootings at night.

"For agencies to operate on the ground, we need a peaceful environment," he said.

Doctors Without Borders said that on Sunday, medical teams in Rutshuru treated 70 wounded, and had been working round the clock since. Some of the people who sought help had been on the run for weeks, said the group, which described the situation as "extremely volatile."

All About Democratic Republic of the Congo • United Nations • Rwanda