(CNN) -- A 30,000-ton luxury cruise ship outran pirates off the coast of Yemen this weekend, the ship's owner said Monday. 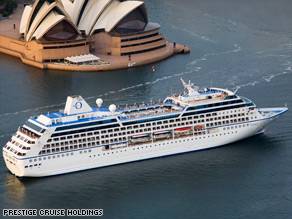 File image of the Nautica in Sydney Harbor

The Nautica was in an area patrolled by international anti-piracy task forces when two small skiffs appeared to try to intercept it, Oceania spokesman Tim Rubacky said.

The ship took evasive maneuvers and accelerated to its full speed of 23 knots or 27 mph. One of the smaller craft closed to within 300 yards and fired eight rifle shots at the cruise ship, he said, but the ship was able to pull away.

It was the first report of a pirate attack on a passenger ship of its size this year, said Cyrus Mody of the International Maritime Bureau, which runs a piracy reporting center.

"There have been a couple of passenger yachts hijacked, but they were much smaller," he said. It is "quite common" for pirates to target ships the size of the Nautica and even larger, he said, but they tend to be cargo ships, not passenger vessels.

Map of pirate activity in the area »

The Nautica escaped without damage or injury to its 684 passengers and 400 crew, and arrived safely on schedule in Salalah, Oman early on Monday morning, Rubacky said.

The International Maritime Bureau has issued piracy warnings for both areas. The Nautica was in a Maritime Safety Protection Area which is patrolled by international anti-piracy task forces, Rubacky underlined.

But the International Maritime Bureau's Mody warned that there was only so much navies could do even in that zone. "The zone has been created to enable navies to patrol and concentrate on a much smaller area than the entire Gulf," he said.

"But, saying that, it is still a large area. Vessels do not automatically get guaranteed safe passage even if they use it."

The Nautica left Rome November 18 on a 32-day cruise to Singapore. It was the first time one of the company's cruise ships had encountered possible pirates, Rubacky added.

He said the company did not plan to change routes to avoid the area, which has seen increasingly audacious piracy in recent months. "We're not considering re-routing as the Gulf of Aden is the most viable gateway from the Med to Asia," he said.

On Sunday, an official from the Kenya Seafarers Association said pirates have reached a deal with the owners of a Ukrainian ship loaded with arms that was seized more than two months ago.

"A deal has been reached to free the MV Faina. Talks on how to deliver the ransom money are ongoing," Andrew Mwangura of the association told CNN.

It is not clear how long those talks will take, but the ship could be freed as soon as an agreement has been reached.

The ship, which is laden with Soviet-era tanks, tank artillery shells, grenade launchers and small arms, was seized on September 25.

It was heading for Kenya, whose government had bought the weapons from Ukraine, Ukrainian Defense Minister Yuri Yekhanurov said, according to the Interfax-Ukraine news agency.

The pirates originally asked for a $35 million ransom, but lowered their demand to $20 million, he said.

All About Gulf of Aden • Somalia • Pirates • Kenya • Yemen