(CNN) -- Seven suspected pirates rescued by a Danish warship were turned over to authorities in Yemen early Friday, two days after they were picked up in the pirate-plagued Gulf of Aden. 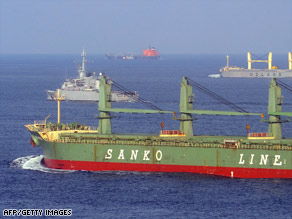 The French frigate Nivose escorts commercial ships in the Gulf of Aden on November 28, 2008.

The men were rescued by the HDMS Absalon on Wednesday after being found in a powerless skiff with rocket-propelled grenades and AK-47s aboard, Danish Navy spokesman Jesper Lynge told CNN. They were found approximately 75 nautical miles (140 km) off the coast of Yemen following a distress call, Lynge said.

"These guys had been without propulsion on their small boat for several days without food or drinking water," he added.

After receiving medical treatment aboard the Absalon, the ship's crew turned them over to Yemen's coast guard Friday morning, said Rasmus Tantholt, a reporter for Denmark's TV2, who was aboard the warship. The skiff's small engine was broken, and the Danish vessel sank the boat in order to prevent any hazard to sea traffic.

Watch how NATO is fighting piracy »

The men are suspected to be pirates because of the weapons on board, Lynge said. Pirates frequently use small boats to attack commercial vessels with small arms and grenades, but Lynge said Absalon crew could not connect the men "directly with another pirate attack in the area," Lynge said.

Lynge said the skiff was found in Yemeni waters, and the Absalon crew was instructed to hand over the men to the Yemen Coast Guard. Yemeni authorities must conduct any investigation because the episode took place in their jurisdiction, he said.

CNN was unable to obtain an immediate comment from Yemeni authorities.

Pirates have seized many ships in recent weeks in the waters of the Gulf of Aden, which separates Yemen from Somalia.

So far this year, pirates have attacked almost 100 vessels off the coast of Somalia and successfully hijacked nearly 40, according to the International Maritime Bureau.

A multinational fleet, including vessels from the United States, NATO member states, Russia and India, has been patrolling waters of Indian Ocean near the Gulf, which connects the Red Sea and the Arabian Sea.

All About Yemen • Gulf of Aden • Somalia