(CNN) -- A key ally of Zimbabwe's President Robert Mugabe on Monday accused the opposition of training for armed rebellion. 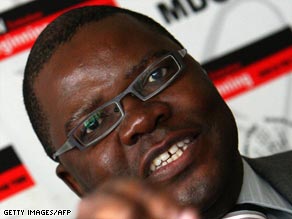 Patrick Chinamasa, Zimbabwe's justice minister, was quoted by the state-owned Herald daily newspaper as saying the Movement for Democratic Change is "bent on foisting war on the country and the region."

The newspaper quoted Chinamasa saying he had "compelling evidence" that the MDC personnel in Botswana are training for insurgency.

Tendai Biti, the secretary-general of the MDC, rejected the allegation, calling it "a dog's breakfast which my own dogs wouldn't touch."

"We seek to achieve democratic change through non-violent means," he said.

But the government and opposition are not close to putting a power-sharing deal into effect, he said.

Biti told reporters the deal signed by Mugabe and MDC leader Morgan Tsvangirai in September is still on hold because Mugabe has refused to cede important ministries to the MDC.

His remarks came two days after the government published a constitutional amendment designed to pave the way for the power-sharing deal to come into effect.

Watch an expatriate give his view on Mugabe »

Constitutional Amendment 19 details the posts and institutions -- including the position of prime minister intended for Tsvangirai -- that were created by the power-sharing deal.

The publication of the draft is the first step of the process of creating a new law in Zimbabwe. For the law to pass, it must be approved by parliament. Parliament will debate it 30 days after publication, according to the country's constitution, and if is approved, it will be then sent to Mugabe for his signature.

The MDC warned Saturday that the move by Mugabe's ZANU-PF party does not mean the amendment will become law.

"Gazetting the bill -- which was done by ZANU-PF -- does not automatically translate into passing it into law," MDC spokesman Nelson Chamisa said. "That can only take place if outstanding issues have been addressed, otherwise we will not support the bill."

ZANU-PF lost its majority in the parliament in elections in March. As no party has the two-thirds majority to pass the law, the MDC must support it for it to pass.

If parliament does not approve the amendment, Mugabe may call for new elections, Chinamasa told The Herald.

"I envisage that it will require two weeks for it to be debated and passed through both Houses. If no support is forthcoming, it means that Amendment Number 19 Bill will be dead matter," The Herald quoted Chinamasa as saying. "In the event that the collaboration that we envisage is not forthcoming, then that will necessitate fresh harmonized elections at some point in time," he said, according to The Herald.

Tsvangirai led all candidates in the March election, but not get enough votes to avoid a runoff, according to the government's official count. He withdrew from the June 27 runoff days before the vote, saying Mugabe's supporters had waged a campaign of violence and intimidation against opposition supporters.

Although the two leaders signed the agreement, brokered by former South African President Thabo Mbeki, three months ago they have failed to agree on how to form a Cabinet.

Meanwhile, the country is battling a cholera outbreak that has killed 978 people since August, according to the World Health Organization. More than 18,413 people have been infected, WHO said Monday.

Last week, Mugabe declared "there is no cholera in the country." His spokesman later said that Mugabe was sarcastically ridiculing what he believes are Western designs to use the outbreak as an excuse to invade the country.

On Friday, Information Minister Sikhanyiso Ndlovu blamed the outbreak on Britain, saying it was "a calculated, racist attack on Zimbabwe." Britain dismissed the charge as a fantasy.