(CNN) -- The United Nations Security Council passed a resolution on Tuesday aimed at combating piracy along the Horn of Africa by allowing military forces to chase pirates onto land in cases of "hot pursuit." 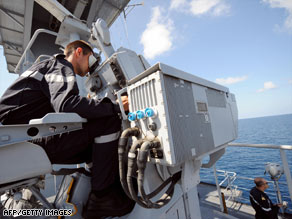 French troops on the lookout for pirates in the Gulf of Aden on November 25.

Military forces from various countries, including the United States, are patrolling pirate-infested waters off Somalia, where attacks have surged this year. Nearly 100 vessels have come under fire, according to the International Maritime Bureau, and almost 40 vessels have been hijacked.

The Security Council resolution, which passed unanimously, expands upon existing counter-piracy tools, including a stipulation that would allow for national and regional military forces to chase pirates onto land -- specifically into Somalia where many of the pirates are based.

Secretary of State Condoleezza Rice was at the U.N. on Tuesday for a discussion of the piracy problem and the Security Council vote.

"I wouldn't be here seeking authorization to go ashore if the U.S. government -- perhaps most importantly the president of the United States -- were not behind this resolution," Rice said after the vote.

Asked if she thought U.S. troops would soon be on land chasing pirates, Rice would not speculate.

"The United States is part of an international effort," she said. "We do have naval forces that have been involved in this effort. What this (resolution) does is to authorize that the boundary of the maritime cannot become a safe haven boundary for pirates. What we do -- or do not do -- in issues like hot pursuit, we'll have to see ... case by case."

Earlier, in remarks to the Security Council, Rice described the growing problem of piracy off the coast of Somalia as "a symptom."

"It's a symptom of the instability, the poverty, the lawlessness that have plagued Somalia for the past two decades," she said, adding that the Bush administration "does believe that the time has come for the United Nations to consider and authorize a peacekeeping operation."

With increased patrols in the area by several countries, reports of exchanges of fire have become more frequent.

In one of the most recent piracy attacks, Indian officials said Saturday they had captured 23 people suspected of trying to take over a merchant vessel in the Gulf of Aden.

In addition to the 12 Somali and 11 Yemeni suspects, Indian navy officials also seized two small boats and "a substantial cache of arms and equipment," the Indian military said in a statement.

All About Pirates • Somalia • MV Faina